Irish in Berlin: Student passed through market minutes before incident

Killian McDonagh says he will avoid Christmas markets from now on

Truck ploughs into a crowded Christmas market in the German capital Berlin, killing nine people and injuring up to 50 others. 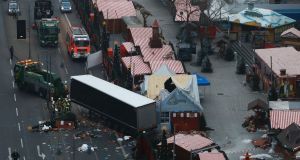 A truck is towed away on Tuesday as forensic experts examine the scene around a truck that crashed into a Christmas market near the Kaiser Wilhelm Memorial Church in Berlin. Photograph: Odd Andersen/Getty/AFP

An Irish student who passed through the Berlin Christmas market just 15 minutes before the incident on Monday night has said he will avoid the markets as they are “an easy target.”

Twelve people were killed and 48 were injured when a a lorry ploughed the market in the city centre on Monday night.

Killian McDonagh said the Christmas markets are an “easy target” and that as soon as he heard about the incident he tweeted to tell everyone that he was safe.

“The Berlin GAA club texted everyone to get them to check in and let them know they were all right. They also contacted the embassy. There is a really good network here and a great system in place,” he said.

“There is a big Irish community here, well over 1,000 people, a mixture of tech workers and students.”

Mr McDonagh is studying European Studies and chose Berlin because of the “wonderful” quality of life, saying rent was much cheaper than in Dublin and that it is “the best place to live in Europe”.

He said that people in Germany had been expecting an incident. “Germany is essentially the leader of the free world, this was to be expected. It could have been far worse.

“People have been keeping calm. Berlin has been through so much over the past 100 years. Berliners are tough. They get on with their lives. I hope this remains the case.”

He said that people are calm and are “going about their business”.

While refugees are evident in the city, Mr McDonagh said there was no sign that Berliners would turn against them, saying the city is “the most tolerant”.

When asked about the rise of right wing extremists and Angela Merkel’s future, Mr McDonagh told Newstalk’s Pat Kenny Show that most of the extremism was in the former East Germany where economic development had been slower.

“They [extremists] don’t speak for the majority, they are only 15 per cent of the vote. I think Angela Merkel is fairly secure. I don’t think she has much to fear.”