The Russian ambassador to Turkey has died after being shot by a gunman in Ankara. 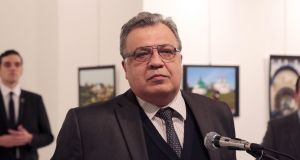 The Russian ambassador to Turkey Andrey Karlov speaks at a gallery in Ankara. He was shot dead during his speech. The gunman is seen at rear on the left. Photograph: Burhan Ozbilici/AP Photo 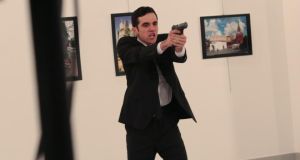 An unnamed gunman after shooting the Russian ambassador to Turkey, Andrei Karlov, at a gallery in Ankara, Turkey. Photograph: Burhan Ozbilici/AP Photo 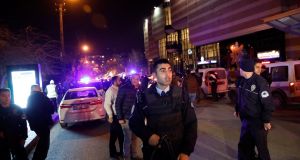 Turkish police secure the area near an art gallery where the Russian ambassador to Turkey Andrei Karlov was shot, in Ankara. Photograph: Umit Bektas/Reuters

Russia has called the assassination of its ambassador to Turkey in Ankara on Monday night a “terrorist act” ahead of key talks on the Syrian conflict between the two countries and Iran in Moscow on Tuesday.

Andrei Karlov, Russia’s ambassador to Turkey since 2013, was shot down while speaking at a photographic exhibition in the Turkish capital.

The perpetrator, identified by Turkey’s interior minister as 22-year-old off-duty police officer Mevlut Mert Altintas from western Turkey, shouted “Don’t forget Aleppo” and “Allahu akbar” (God is greatest) during the shooting, in possible reference to Russia’s involvement in the war in Syria.

He also made a hand gesture often used by militant Islamists and jihadists.

Mr Karlov, who is understood not to have had a bodyguard or security detail accompanying him, was shot several times from behind.

The attacker wore a black suit and tie having presented himself as a security guard in order to gain entry to the exhibition. He did not not target others attending the exhibition and was reported by Turkey’s Anadolu news agency to have been “neutralised”, apparently killed.

Ireland’s Ambassador to Turkey, Brendan Ward, said Mr Karlov was a respected diplomat. “I met him at the Gallipoli centenary [in April 2015] and several times since; he was a complete professional,” said Mr Ward.

“We are aware of the security issues in Turkey and we keep it under review. Ankara is generally a safe city [and] we will likely have a security review early next year,” he said.

The shooting will put increased strain on Russia-Turkey relations at a sensitive time, when both are involved – from opposite sides – in attemps to bring about a resolution of the conflict in Syria.

Since September 2015, Russia has backed the government of Bashar al-Assad in Syria in its war against opposition forces, Turkey continues to support Syrian rebel groups the Kremlin repeatedly refers to as terrorists.

Nevertheless, ties between the two countries have warmed in recent months following an eight-month freeze in relations after Turkey shot down a Russian jet on the Syrian border in November 2015.

Today’s talks in Moscow about the future of Syria between the foreign and defence ministers of Russia, Iran and Turkey are to go ahead in spite of the murder of Mr Karlov.

The Turkish foreign ministry said the country would not allow the killing to “cast a shadow” over Turkish-Russian friendship.

While first reports indicated Mr Karlov’s killer may have acted alone, Turkey has struggled to get a handle on the rise of home-grown jihadists and Islamic State-linked militants returning to Turkey from Syria. Turkey has also this month been rocked by bomb attacks carried out by Kurdish separatists that targeted police in Istanbul and Kayseri and killed more than 55 people.