12 dead after truck driven into Christmas market in Berlin

Truck ploughs into a crowded Christmas market in the German capital Berlin, killing nine people and injuring up to 50 others. 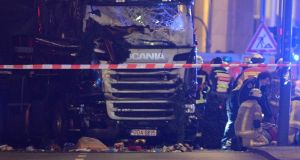 Rescue workers around a truck which crashed into a Christmas market close to the Kaiser Wilhelm memorial church in Berlin, Germany on Monday evening. At least nine people have died in the incident. Photograph: Paul Zinken/EPA 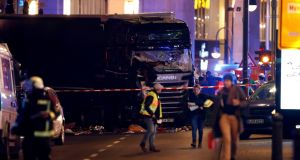 A truck is seen after a crash near the Christmas market in Berlin, Germany. Photograph: Fabrizio Bensch/Reuters 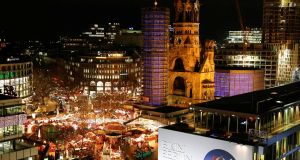 A general view of the Christmas market on the main shopping street Kurfuerstendamm in Berlin, Germany. Photograph: Fabrizio Bensch/Reuters 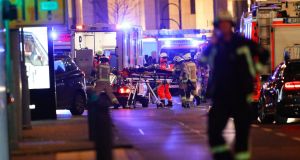 Paramedics work at the site of a crash at a Christmas market in Berlin, Germany. Photograph: Fabrizio Bensch/Reuters 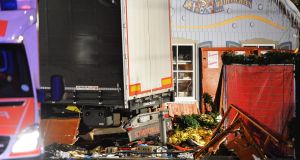 View of the truck that crashed into a Christmas market in Berlin, Germany. Photograph: John MacDougall/AFP/Getty Images 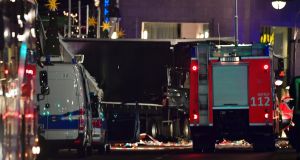 A police car sits in front of the truck that crashed into a Christmas market in Berlin, Germany. Photograph: John MacDougaal/AFP/Getty Images 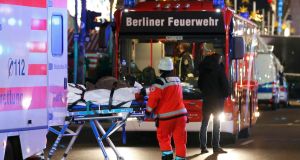 A survivor of is rescued on a stretcher near a Christmas market in Berlin, Germany. Photograph: Fabrizio Bensch/Reuters 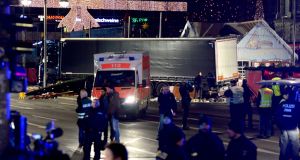 Police and rescue workers next to a truck after it crashed into a Christmas market, close to the Kaiser Wilhelm memorial church in Berlin, Germany, killing at least nine people. Photograph: Maurizio Gambarini/EPA

Germany is in shock and mourning after a truck ploughed into a Berlin Christmas market on Monday evening in a possible terrorist attack that killed 12 and injured at least 48.

The incident took place at 8pm at the market around the Kaiser Wilhelm memorial church in the western city centre, on the pedestrianised Breitscheidplatz square.

“What we are seeing here is dramatic,” said Michael Muller, Berlin’s mayor and state governor at the scene.

“Berlin is doing everything possible to deal with this situation - but it is depressing that we are experiencing something similar to our friends in other cities.”

Eye-witnesses at the market reported hearing a loud bang as the black articulated truck left the Budapesterstrasse and ploughed into the narrow market walkways.

It stopped short of the market Christmas tree beside the iconic ruined church tower, with its windshield shattered and demolished wooden cabins in its wake.

Minutes after the attack the entire area was evacuated, bringing Berlin’s western city centre to a standstill at one of its busiest times of year.

Police arrested one man suspected of involvement in the attack a short distance away and confirmed that a second man was found dead in the passenger seat of the truck’s cabin.

According to Polish media, the truck was registered to a transport company in Gryfino, near the German border. The truck was en route from Italy and the wife of the driver said she last had contact with her husband at 4pm.

Ariel Zurawski, the owner of the transport company, told Poland’s TVN news channel the driver was his cousin, a driver of 15 years’ experience, and he could vouch for his character. He claimed the driver of the truck in Berlin was not his cousin.

By late evening, as emergency crews treated injured at the scene, the popular market near the zoo was empty except for police patrolling with machine guns.

At 10.20pm local time, the festive market lights were switched off, as public transport and all other traffic was diverted from the scene.

Germany’s federal prosecutor has stepped in to take over the investigation of an incident with echoes of the July 14th truck attack in Nice, when a truck raced down the promenade, killing 84 people and injuring over 150.

After several near terror misses, and a series of attacks during the summer, German authorities have been braced for months for a serious, fatal incident.

Police quoted by the DPA press agency said they assumed they were dealing with a terrorist attack and urged locals over social media: “Please help us. Stay at home and don’t spread rumours.”

Senior German politicians refused to be drawn on the motives behind the attack on Monday night.

“My thoughts are with the relatives of the victims and with the injured of this terrible incident,” he said.

His Berlin state colleague Andreas Geisel said in a statement that authorities “still know nothing about the background” of the incident.

If confirmed as a terror attack, it will shake already strained public confidence in Germany, almost a year after over 130 women were sexually assaulted at New Year’s Eve celebrations in Cologne by men, including non-nationals and some asylum seekers.

In the summer, Bavaria was rocked by a series of bomb, gun and knife attacks, with some perpetrators revealed as asylum seekers linked to Islamist extremist groups.

On Monday, police in the southwestern city of Ludwighshafen confirmed they had a 12 year-old German-Iraqi boy in custody suspected of trying twice to detonate explosive devices, including one at a city Christmas market.

Even before the details of the latest attack were known, the far-right Alternative für Deutschland (AfD) - a long-time critic of Chancellor Angela Merkel’s refugee policy - wasted no time in blaming the German leader.

An hour after the Berlin incident, senior AfD politician Marcus Pretzell attracted fury online for tweeting: “When will this hypocrisy finally end? These are Merkel’s dead.”

Meanwhile, Minister for Foreign Affairs Charlie Flanagan said he was “horrified by the loss of life in Berlin”.

The Department of Foreign Affairs urged Irish people in Berlin to contact their loved ones to confirm they were safe and said anyone with concerns could call 01-4082000.

1 Coronavirus: Government to extend restrictions for at least two weeks
2 Chief medical officer urges people not to visit hardware stores
3 Growing hope in Government of partial easing of restrictions after May bank holiday
4 Coronavirus: More ‘striking’ evidence BCG vaccine might protect against Covid-19
5 Coronavirus: Ireland will have to ‘live alongside the virus’
Real news has value SUBSCRIBE