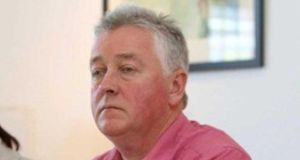 The director of one of Northern Ireland’s most prominent human rights organisations has admitted he was a member of the IRA in the early 1970s.

Paul O’Connor, who heads the Derry-based Pat Finucane Centre, told The Irish Times he joined the IRA in 1970 when he was 15, and left in 1972.

He was responding to claims published online by the convicted IRA bomber Shane Paul O’Doherty, who served 15 years in prison for a letter-bombing campaign in England in the 1970s.

“The question has been put out there, was I in the IRA?” Mr O’Connor said. “Yes, I was. I think it’s important for me to confirm that because I always said if the question was put to me directly I’d never deny it.

Mr O’Connor said he was “active in the IRA” in the Bogside for about six months in 1972, when he was on the run in the “no-go” area of Free Derry. He was involved in patrols and manning checkpoints, but could not leave the area.

“I didn’t create any victims, that’s absolutely clear,” he said. “None.”

He was ordered to leave the IRA in 1972. “I had disobeyed orders and left a safe house in Buncrana and come back to Derry.”

He left for Germany and lived there and in the United States before returning to Derry in the early 1980s where he became an activist and campaigner.

The Pat Finucane Centre represents families bereaved by the Troubles and is named after the Belfast solicitor who was murdered by loyalists in 1989. It is part-funded by the Department of Foreign Affairs in Dublin and has been involved in a number of high-profile campaigns on behalf of those killed and injured by the British state, as well as investigations into collusion between loyalist paramilitaries and the security forces.

Earlier this week, Mr O’Doherty published a number of allegations about Mr O’Connor in his blog, which included a claim that he was involved in the death of Jim O’Hagan, a 16-year-old IRA member who was shot accidentally in 1971.

Mr O’Connor said it was a “totally false story . . . I wasn’t there, a fact Jim’s parents are well aware of, and I strongly suspect the police also know that.”

Mr O’Connor said the injured teenager had been brought to his house, where an ambulance was called. To avoid arrest, Mr O’Connor spent several months on the run in the Republic but returned to Derry after Bloody Sunday in 1972.

He said he has never been questioned by the police about Mr O’Hagan’s death and has no criminal convictions. A claim he had received an “on the run” letter was “preposterous”, he said.

Asked about a photograph which Mr O’Doherty alleged shows him carrying a gun at an IRA checkpoint in 1971, Mr O’Connor said “it is reasonable for people to look at the photo and say that looks like Paul O’Connor,” but he did not remember the photographs being taken.

Mr O’Connor said he could “completely understand why victims of the IRA would feel angry,” and said the Troubles was “a futile conflict, a futile waste of life. It should never have happened.”

He said he has spoken to Mr O’Hagan’s family and those represented by the Pat Finucane Centre, and any said decision as to his future would be a matter for families, staff, stakeholders and board. “If I don’t have the confidence of the families we work with, then I am clearly unable to continue doing my job, but that is for them to judge, not others.

“To those who say, but you can’t work for the PFC because you were in the IRA 48 years ago . . . I would ask people to judge me on what I’ve done throughout my entire adult life.”