Q&A: What responsibilities fall on lorry drivers for their loads? 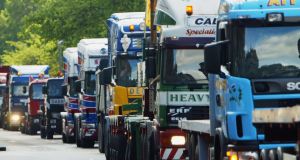 How responsible lorry drivers are if they are caught transporting illegal migrants depends on the country in which the migrants are found. Photograph: Chris Furlong/Getty Images

Who is responsible for the contents of a lorry crossing international borders?

Can a driver be held liable for transporting migrants into the State?

Yes. Under the Illegal Immigrants (Trafficking) Act 1999, a person who organises or knowingly facilitates the entry into the State of an individual who they know or has reasonable cause to believe to be an illegal immigrant or who intends to seek asylum can be fined €1,900 or imprisoned for up to 10 years.

But what if migrants break into a container on a lorry and hide without the driver knowing?

The law was specifically designed to assuage concerns from the haulage industry that their drivers could be held criminally liable if they have inadvertently transported migrants illegally. The responsibility for transporters to check vehicles for stowaways was not covered by the sanctions section of the Act.

Does this apply to Irish lorries travelling through the UK to and from Europe?

No. The rules are much stricter in the UK. Where migrants are found in a vehicle and “effective security measures” have not been put in place, the driver and the owner of the lorry can each face a fine of up to £2,000 (€2,325) for each “clandestine entrant” discovered in the lorry.

Does this put pressure back on drivers and lorry owners to check their loads carefully?

Yes, though the industry complains that, despite regular checking on a journey, migrants and gangs trafficking them are constantly looking for ways of boarding lorries without the drivers noticing. These include lifting the back doors of a container off its hinges and slipping into the container through a small gap undetected and avoiding a metal seal being broken or tampered with.

Aidan Flynn, general manager of Freight Transport Association Ireland, complains that in practice drivers are often assumed to be guilty of human trafficking if migrants are found and have to prove their innocence.

“It is actually quite difficult to identify whether people are inside unless they are banging on the side,” he said. “They are able to force open a door on the hinge so the whole panel remains intact. On inspection you would not have been able to tell if the doors have been tampered with.”

What is the effect on haulage companies trying to check for migrants?

Irish hauliers say they are being forced to pay a much greater excess sum before their insurance covers the damage to lorries and damaged or contaminated cargo because of the risks of carrying migrants.

Others say crossing the UK puts undue pressure on drivers to do far more than they are equipped for.

“We took 14 people from one of our trucks in Belgium a few months ago,” said Alan Blair, who runs his own transport company out of Ballymena in Co Antrim. “It is very unfair asking our drivers to be responsible for migrants entering the UK. They are trained to drive a truck and at the same time expected to be police, customs, immigration and Border Force all in one.”