Fur farming is deemed contrary to animal welfare. But what of those who work in it? 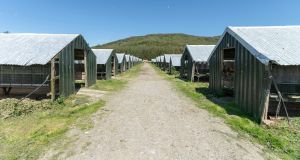 Rows of mink cage houses each holding up to 1,000 mink. Donegal-born Sven Sjoholm’s parents, Sune and Karita Sjoholm, moved from Finland in 1968 in response to an advertisement looking to attract foreign fur farmers to Ireland.

Hidden among the hills of south Donegal, tucked behind a shroud of fir trees, is one of Ireland’s most controversial farms. Tall steel gates, electric fences and 24-hour security are needed to stop the animals breaking out and unwanted visitors breaking in.

Tazetta Teoranta is one of just three fur farms left on the island. The others are in Laois and Kerry. A fourth farm closed in 2014. Fur farming has been banned or is in the process of being banned in 14 of the EU’s current 28 member states.

Last month, the Department of Agriculture, Food and the Marine announced a phasing out of fur farming, in response to a “shift in societal expectations [. . .] and recent veterinary evidence [that] suggests mink farming is in conflict with good animal welfare”.

It said the Government would introduce a Bill to make it illegal for any new fur farms to be established.

“Phase-out arrangements will be put in place for the small number of current operators to allow for an orderly wind-down of the sector and to allow time for employees to find alternative opportunities,” Minister for Agriculture Michael Creed said.

Donegal-born Sven Sjoholm (36) is a third-generation mink farmer. His parents, Sune and Karita Sjoholm, moved from Finland in 1968 in response to an advertisement taken out by the Department of the Gaeltacht looking to attract foreign fur farmers to Ireland.

An incentive of 15 years’ tax-free profits was offered, Sjoholm says in his soft Donegal accent.

The farm has also received grants from Údarás na Gaeltachta totalling €133,460 up to the end of 2017, as part of the effort to develop enterprises in the Gaeltacht regions.

The Government’s decision to ban fur farms is a U-turn, he says. “I have put millions of euro worth of investment into the place. Now it is all at risk with the stroke of a pen.”

In 2012, in response to public pressure, the Department of Agriculture conducted a review of fur farming practices. The review group “concluded that it did not find the arguments in favour of banning the farming of fur animals in Ireland compelling,” so the trade was allowed to continue under licence and subject to official control.

Following this decision, Sjoholm invested in new cages, machines and facilities, which were required under new European laws. A new food mincer alone cost €80,000, he says.

“It was very difficult to go forward and put in those investments before we knew what was happening. When we were given the green light, I put millions of euro in, as did my colleagues on other [fur] farms as well.”

Public discontent with fur farming has been building for years, but mink farmers like Sjoholm feel they have been cut out of the conversation. Videos taken by animal rights activists surface online, showing “tortured” animals, but the welfare of his mink is paramount, Sjoholm insists.

“There are rumours that we skin animals alive, which is just total nonsense. Anyone working in farming is not in the business to be cruel to their animals. You have to have a love for the animals you are working with,” he adds.

For the sake of “openness and transparency”, and to counter misconceptions about his trade, Sjoholm has opened his farm to The Irish Times.

Aside from the rumble of the “Minkomatic” feeding truck, the 30-acre farm is silent. There is not so much as a squeak to suggest that 30,000 mink are curled up in cages inside the long, narrow huts.

There are no doors on these shed-like structures; one can see right through from one end to the other. Open sides allow air and light to pour in and the animals to peer out.

We try to keep them as best as we can in their family groups. It’s better for the animals as they are happier that way

At 91cm by 45cm by 33cm, the cages are slightly larger than EU requirements. At full-size, a mink will measure between 46 and 56 centimetres in length.

The mink inside are worth between €25 and €80 each, depending on pelt price fluctuations . While their fur is their primary value, every part of the mink gets used, says Sjoholm. Leftovers get sent to a rendering facility, where they are used for biofuels or in cosmetic products, he adds.

A typical full-length fur coat requires about 20 mink pelts, according to Caroline Barnardo from Barnardo’s Furriers on Grafton Street in Dublin.

While a mink fur coat costs several thousand euro, it will last the buyer between 20 and 60 years, at which point the fur can be refashioned into a throw or other furnishings, Barnardo says. Natural fur is “much kinder to the environment”, she says, because faux furs are made from plastic and oils.

As the Minkomatic truck moves through the hut, it slops lunch through the tops of the wire cages. On the menu is blended fish guts, poultry and “anything that doesn’t end up for human consumption”, says Sjoholm.

Some of the mink shoot up immediately for a taste, others are less enthused. Short strips of tubing in each cage provide entertainment for the animals, much like a hamster wheel, says Sjoholm. In this hut, two or three babies are kept in the same cages as their mothers.

“We try to keep them as best as we can in their family groups. It’s better for the animals as they are happier that way. As they get bigger, we might have to pair them off with other kids from different families.”

The mink are bred not only to increase the quality of the fur, but to ensure they are placid, with the calmer ones selected to pass on their genes, he says.

However, veterinary surgeon Dr Mark d’Alton doubts breeding is the reason the animals are so placid. “You cannot alter an animal’s fundamental nature,” he says, adding that studies show that when released into the wild, rodents quickly return to their natural state.

Dr d’Alton, a member of Veterinary Ireland, raises concerns for the welfare of the animals. He says that because wild mink “tend to have about seven kilometres of river to themselves,” placing them in cages for the entirety of their lives imposes additional “fear and distress”.

The mink spend their entire lives in these confined spaces until they are transferred to a euthanasia box which is wheeled into the hut. It takes around six months for mink to reach the desired size, at which point they are gassed to death using carbon monoxide.

EU regulations recognise that killing animals “may induce pain, distress, fear or other forms of suffering to the animals even under the best available technical conditions” but that business operators should take the “necessary measures to avoid pain and minimise distress and suffering”.

There are not many employment opportunities around here. Take the mink farm out and there is nothing left but bars and restaurants

Placed into the euthanasia box at staggered intervals, each animal take less than a minute to die, says Sjoholm.

While the killings are not pleasant, “it’s all part and parcel of farming,” he says. “When I talk with other colleagues in sheep farming or pig farming, we all have this common thing where we like the animals we work with. At the end of the day, the animals you are farming still have to go to market.”

Many in the small, neighbouring village of Glenties said they would be sad to see the fur farm go. Sjoholm and his family are well-liked.

The company has sponsored the Naomh Conaill GAA Club and has provided jobs for many locals over the years. At peak season, it employs 15-20 workers, which is a significant number to the small town, villagers say.

“There are not many employment opportunities around here,” says hardware salesman Paul Guigan. “Take the mink farm out and there is nothing left but bars and restaurants.”

The 34 year old says young people have no reason to stick around the area. “The farm is a big source of employment, so this is a major blow for the town.”

Pat Craig (68) also feels the farm is “very beneficial to the community”.

In the hills of Donegal, “every pay cheque matters”, he adds. “I think they deserve a break. They have done nothing but create employment. They are not bothering anybody.”

Veterinary Ireland has welcomed the Government’s proposal to phase out fur farms. It said it “believes that this is the correct and humane course of action and will help augment Ireland’s reputation as an animal welfare-focused country”.

The Irish Society for the Prevention of Cruelty to Animals (ISPCA) also welcomed the announcement, having campaigned on the issue for many years.

“There is overwhelming scientific evidence that fur farming is cruel,” says ISPCA chief executive Dr Andrew Kelly. “Mink are essentially wild animals and keeping them in small cages in which they are deprived of the ability to express their normal behaviours such as swimming and foraging is not acceptable.

“A ban is the only solution to the serious welfare concerns caused by the fur factory farming of mink.”

Sjoholm says nobody from the Department of Agriculture, Food and the Marine has “had the courtesy to get in contact” with him to explain what is happening, adding that the first he heard of the change was through a press release on the department website.

“Everything is up in the air and it’s a very stressful situation for everyone. It actually frightens me to think about what will happen next, as I risk losing everything.”