Expenditure eating out is more than double the EU average of 7%, according to Eurostat 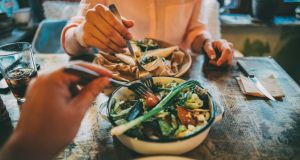 Ireland experienced the second-largest increase in the share of household expenditure spent dining out between 2008 and 2018. File photograph: Getty

Irish households devote a higher percentage of their expenditure to eating out in restaurants and on takeaways than any other country in the European Union, according to latest statistics from Eurostat.

The figures show that of Irish households’ overall expenditure, some 14.4 per cent was spent on catering services, which includes restaurants, takeaways, cafes and canteens. This is more than double the EU average of 7 per cent.

Spain spent the second highest percentage dining out at 13 per cent of household expenditure, followed by Malta on 12.6 per cent.

Eurostat, which collects a range of statistics on EU member states, published the data on Thursday based on spending information for 2018.

Greece spent the fourth highest percentage of household expenditure in restaurants and on other catering, at 12.4 per cent, followed by Austria (10.8 per cent) and Portugal (9.2 per cent).

The United Kingdom came in ninth in the table, spending 7.7 per cent of household income eating out, followed closely by Hungary (7.6 per cent).

The country found to spend the least percentage was Romania. Just under 2 per cent of household expenditure went on dining out. The second lowest was Poland (3 per cent) and then Lithuania (3.4 per cent).

German households spent the fourth least out of the 28 EU countries, with on average 4.3 per cent of their spending going towards restaurants or other catering. French homes also spent less than the European average at 5.9 per cent of total expenditure.

Ireland experienced the second-largest increase in the share of household expenditure spent dining out between 2008 and 2018. Households’ share of spending on restaurants and takeaways increased by nearly 3 per cent over the 10 years.

The proportion of household expenditure spent eating out over the decade declined in Romanian, Spain, Slovakia and the United Kingdom.