Ireland will not be isolated in Brexit talks, Juncker says

President of the European Commission, Jean-Claude Juncker, has said that Ireland has to be part of an Brexit deal. 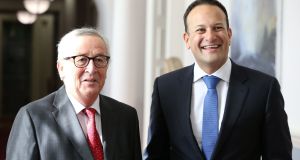 Taoiseach Leo Varadkar and President of the European Commission, Jean-Claude Juncker, during his visit to the Government Buildings in Dublin. Photograph: Brian Lawless/PA Wire

Ireland will not be left isolated by other European Union countries in the negotiations on Britain’s withdrawal from the bloc, the president of the European Commission has said.

Jean Claude Juncker was speaking at a press conference with Taoiseach Leo Varadkar after the pair held a meeting in Government Buildings on Thursday.

“This is not a bilateral question between Ireland the United Kingdom — this is an issue between the UK and the European Union,” Mr Juncker said.

“We want to make it clear again and again that Ireland is not alone. We have Ireland backed by 26 member states and the Commission — this will not change.

“I am strongly against any temptation to isolate Ireland and not to conclude the deal on Ireland. Ireland has to be part of the deal.”

Mr Juncker also said British prime minister Theresa May is a trustworthy negotiating partner, after Mr Varadkar earlier this week said the ability of Britain to strike free trade deals with other countries once it leaves the EU will be damaged if it does not honour its commitments on the Border.

The visit by the senior EU delegation took place ahead of a European Council summit next week, which was initially intended to reach agreement on the so-called “backstop”, but this timeline has been pushed back to later in the year.

Mr Varadkar has already pushed the timeline out, and even suggested that a deal on the backstop — which prevents a hard border even in a “no-deal” Brexit scenario — may not happen until November.

The Taoiseach said it was “abundantly clear” that the backstop must be in place in order for there to be a withdrawal agreement and a post transition period when Brexit takes effect from March.

“Let me be blunt: there isn’t much time left if we are to conclude an agreement and to have it operational by the time the United Kingdom leaves the European Union next March,” he said.

“As the European side has made clear on many occasions, the withdrawal agreement must include a legally binding backstop so that there cannot be a hard border on the island of Ireland in the future, whatever circumstances may prevail. And a backstop cannot have an expiry date.”

Mr Varadkar held a dinner in Mr Juncker’s honour in Dublin Castle on Thursday night and also spoke with Donald Tusk, the president of the European Council, by telephone.

As well as Brexit, the Taoiseach and Mr Juncker spoke about migration, which will be a major point of discussion at next week’s European Council meeting.

“While Ireland is not on the front line of the migration crisis, we do want to play our part in developing a comprehensive issue EU approach,” Mr Varadkar said. “Like so many big issues facing the world and facing Europe at the moment, nation states, acting alone cannot solve these problems so we need a European approach to strengthen our external borders, tackle the root causes of migration.”