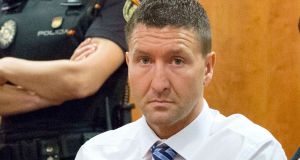 Dublin man James Quinn has been sentenced to 22 years in prison by a Spanish judge for the murder of Gary Hutch.

State prosecutors had told his murder trial judge they wanted him jailed for the maximum 25 years for the murder on September 24th, 2015 and three years for illegal weapons possession.

But Judge Ernesto Carlos Manzano sentenced him to only 20 years for murder - the minimum he could have got under Spanish law — and two years for the gun crime.

Lawyers for Quinn (35), had announced they would appeal after jurors found him guilty of the two crimes last Friday after a four-day trial.

His defence lawyers had asked for the judge to sentence him to the minimum terms.

Hutch (34), an armed robber and drug dealer from Dublin’s north inner city, was a nephew of Gerry Hutch. He was shot dead beside a swimming pool at the Angel de Miraflores apartments complex, near Marbella, in September 2015.

The feud said to have been sparked by the murder has cost the lives of at least 18 people.

Prosecutor Jose Barba had accused Quinn at the start of his trial of being the gunman who shot Hutch in the head after chasing him round the gated estate. He later gave the jury the option of convicting him of murder as only the getaway driver and lookout.

Jurors took that option and ruled Quinn was guilty because he had been a “necessary participant.”

Judge Ernesto Carlos Manzano said in a 15-page written document he was sentencing Quinn to 20 years, noting he had a clean record in Spain and was not the shooter.

He described the murder as “execrable” and said Quinn and the unidentified gunman deserved “deep social reprobation.”

But he added: “Other circumstances need to be taken into account in terms of the crime and the man convicted of it such as the fact he had no previous convictions in Spain and he has not been convicted as the direct material author of the crime.”

He said of the gun conviction, which related to a weapon found in a bedside table during a search of Quinn’s home and not the two guns recovered from the getaway BMW used by Hutch’s killers: “It is appropriate to impose the minimum two years under Spanish law for the crime.

“That is because of the guilty man’s personal circumstances which are that he had a got a clean criminal record in Spain, and because the jury in this case has limited the weapons crime exclusively to the gun found in his home with the series number erased.”

He said the amount of prison remand time Quinn served before his conviction - nearly two years since his arrest - should be taken into account in determining how long he spends in prison.