‘Invisible and fearful’: Are owners of defective apartments being ignored? 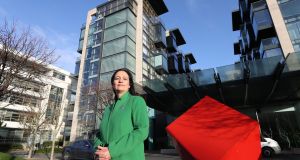 Green Party deputy leader Catherine Martin at the Beacon South Quarter in Dublin. ‘People are fearful of their complex being named and their house values dropping as a result.’ Photograph: Nick Bradshaw/The Irish Times

Green Party deputy leader Catherine Martin is standing outside the gates of Beacon South Quarter, but is unable to knock on the doors of more than 800 of her constituents.

Owners at the block have been asked to pay up to €13,500 each to repair serious building defects including a lack of fire stopping as well as water streaming in their windows.

However, Martin struggles to get near them to hear about their issues.

The Dublin Rathdown TD first became aware of the issue when owners from the complex got in touch with her. It was not an issue she had a chance to hear about on the doorstep, because she never got past the gates of the complex.

We don’t see them protesting in large numbers and I wonder does this play into the State’s hands?

Martin, who has been lobbying on behalf of owners of defective apartments for three years and brought forward a Dáil motion on the subject in 2017, believes many of these people remain “invisible” because of their location.

“Politicians and canvassers never actually get past the gate and into apartment complexes to knock on doors and talk about the defects issue,” she says. “I wonder if this is the reason why the Government has been able to throw a blind eye to this for so long?”

An Oireachtas housing committee report entitled Safe as Houses last year recommended the establishment of a redress scheme for the owners of defective properties, but the Government has declined to take any action on foot of the report, repeatedly expressing concern about exposing taxpayers to an unquantifiable liability.

“The State is not being shamed by people marching to the Dáil because people are fearful of their complex being named and their house values dropping as a result,” Martin says. “These people are invisible. We don’t see them protesting in large numbers and I wonder does this play into the State’s hands?”

Sinn Féin housing spokesman Eoin Ó Broin agrees that many homeowners with latent defects are “nervous about going public” or the residents in a development are “divided about the best course of action”.

Ó Broin has also been working on the issue for years, most recently tabling a Bill in the Dáil that seeks to establish a redress board for people whose homes are affected by defects. He says many facing these bills are “working couples struggling to pay high mortgages along with other living costs with little time for political lobbying”.

“To be honest, though every single TD and Minister knows about this issue and what needs to be done to help those with latent defects, some continue to bury their heads in the sand hoping the issue will go away,” he says.

Low voter turnout among apartment dwellers may also be a factor in Government inaction. Sample figures shared with The Irish Times show that between 4.6 and 5 per cent of people living in apartment blocks in the south inner city exercised their vote at the local and European elections in May.

Labour Senator Kevin Humphreys believes owners’ lack of visibility is one of the main reasons why the Government is putting the issue on the long finger.

Apartment owners are a very fluid community; the amount of returned letters we get is phenomenal

“The estimates in relation to defects vary between 70,000 and 90,000 affected apartments around the country, but either way that is well in excess of 100,000 people,” Humphreys says.

“We’ve seen the pyrite issue being addressed, and a redress fund being issued, despite the fact that this is a much smaller group of affected people – yet there has been no movement from Government and huge resistance to do anything for apartment owners, a group who are the worst-affected by poor building regulations and standards.”

Humphreys says engaging with people living in apartment blocks is a massive challenge for politicians, because “they are literally behind closed gates”.

“Another issue is that apartment owners are a very fluid community; the amount of returned letters we get is phenomenal,” he says.

Martin has encouraged apartment owners in this situation to ensure they are registered to vote ahead of the next general election and show “that they will not accept the level of inaction on this issue that this Government has consistently shown on this issue”.

Ó Broin is confident that the establishment of the Construction Defects Alliance, a group which already has members from 61 developments across the State, means “the issue won’t go away”.

“Latent defects will be an election issue in 2020,” he says.