Subsidies cost exchequer €2.44bn in 2014 and removal would have ‘sizeable impact’ 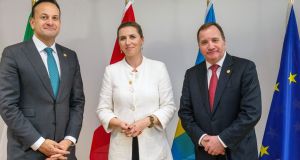 Taoiseach Leo Varadkar, Danish prime minister Mette Frederiksen and Swedish prime minister Stefan Löfven. The three countries have announced they will be working much more closely in the future on climate change

Carbon emissions could be at least 20 per cent lower by 2030 if the Government withdrew a range of fossil fuel subsidies, including those in the transport and peat production sectors, research from the Economic and Social Research Institute (ESRI) has found.

Subsidies to fossil fuels cost the exchequer almost €2.5 billion in 2014, the institute reported.

The news comes as EU leaders in Brussels sought to agree an ambitious plan to reduce carbon emissions to net zero by 2050 through a €100 billion adjustment fund.

Speaking in Brussels, Taoiseach Leo Varadkar said Ireland strongly backs the EU’s plan, which will require huge cuts to carbon emissions in the next decade, though specific targets have not yet been set.

He acknowledged it would “take some persuading” to get Irish people to make the changes required to achieve net zero carbon emissions.

But the ERSI’s research demonstrates the extent to which the Government subsidises fossil fuels, which are responsible for significant emissions.

In its research, the think tank found that the removal of eight fossil fuel subsidies could have a “sizeable impact” on reducing emissions in the Irish economy while also having a modest adverse effect on growth and household income.

Some of those include subsidies on marked diesel used in agriculture, subsidies for electricity generation from peat, the exemption of certain jet fuel from excise duty for commercial aviation purposes and the diesel rebate scheme used by hauliers.

If all of those subsidies were to be removed next year with the exception of fuel allowances, CO2 emissions would fall 20 per cent by 2030 while gross domestic product (GDP) would decline by 1.24 per cent, the ESRI said.

If Government removed the subsidies and increased carbon tax by €6 annually from next year, real GDP would be 1.8 per cent lower in 2030 while CO2 emissions would decline by 31 per cent compared to a scenario in which nothing changes.

The ESRI is clear that if subsidies are removed, economic output in the subsidised sectors, particularly air transportation and peat, would be reduced.

On the whole, however, with the exception of energy allowances for households, the removal of subsidies would have a “negligible” impact on the real disposable income of households.

“Increasing the carbon tax, in addition to the removal of subsidies, would lead to more substantial reductions in emissions with relatively minor decline in household incomes,” said Dr Aykut Mert Yakut, one of the report’s authors.