Investigation launched after fisherman was found dead off Donegal coast 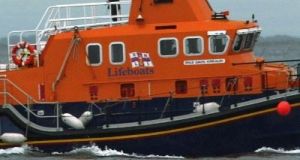 An investigation has been launched after an experienced fisherman was found dead in the water after his boat was washed up onto rocks off the coast of Co Donegal.

The fisherman, named locally as father of five James Byrne, was found after his vessel washed onto rocks off Teelin in south Donegal on Wednesday night.

Members of the coastguard and Rescue helicopter 118 were alerted to the scene around 9pm when the boat was spotted.

Mr Byrne, who was from Cashel, Kilcar and in his early 70s, was found dead in the nearby waters. It is understood that he was wearing a lifejacket.

The discovery followed a large-scale search by a number of groups including the Arranmore Lifeboat, Killybegs Lifeboat and Sligo Lifeboat.

A post mortem was carried out in Letterkenny University Hospital on Thursday.

A full investigation has now been launched and his vessel has been removed from the area for a forensic examination.

A friend said, “He was a lovely man with a lovely grown-up family and the thoughts of everyone are with his wife and his elderly mother.”

Malin Head Coastguard, who co-ordinated the search, said James was last seen putting down lines around 6pm close to the shore. They believe the incident which led to his death happened between 6pm and 8.30pm.

Meanwhile, a search for a fisherman off the coast of Kerry resumed on Thursday morning.

It is understood the man fell into the water at Kerry Head at around 8.30pm on Wednesday.