First day back in school: ‘We’re all finding our way’ 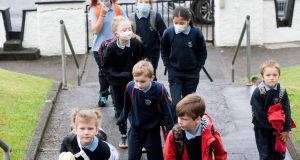 “We’re all finding our way today,” principal Pádraig Kenny assured four-year-old Emily Feeney as she hesitantly made her way towards one of the two entrances to St Hugh’s primary school in Dowra on Wednesday morning.

Emily was the first of the four junior infants to arrive at the Co Leitrim school, which is a stone’s throw from the Cavan border, and she was happily ensconced at her desk long before most of the 48 pupils arrived.

Five-year-old Keva Wynne Flynn was next in the door and her parents Louise and Kevin were feeling “fortunate” as they lingered by her desk, a first day indulgence that might not be repeated.

Signs on one door warned: “No Parents/Guardians beyond this point.” But there was a relaxed atmosphere as the two-roomed school reopened after more than five months.

“I am from Rathfarnham and to be honest I wouldn’t like to be sending Keva to a school in Dublin. I would be a lot more anxious today,” said Louise.“Keva is a little bit anxious but we know she’ll be fine. She was a 25-week preemie [premature] so we are very, very lucky.”

Pádraig Kenny, a member of the Leitrim county football team which won the Connacht title in 1994, thinks they are all lucky in many ways. “We are lucky first to be living in a county where the incidence [of Covid-19] is very low and there are many aspects of this which are more manageable for schools like ours.”

While social distancing might not be too hard with only 48 children, breaks will be staggered to ensure no mixing between the two classrooms.

A big clearout was organised to help facilitate social distancing in the senior room, where perspex screens separate pupils who face each other across double desks.

“We got a skip in. A lot of stuff was heading in that direction anyway but this hastened its demise,” said the principal.

The children had cheered loudly on that day way back in March when they and the teachers heard then taoiseach Leo Varadkar on the radio announcing the immediate shutdown of all schools. But all, bar one – junior infant Ryan Gilrane who couldn’t be coaxed inside – seemed happy to be there. They bounded up the path – separate routes for each of the two classrooms – taking the teachers’ visors and the hand sanitisers in their stride. Ryan’s reluctance to go to school was definitely not Covid related and his parents, Enda and Christina, had no worries about the health implications of having their three youngest back at St Hugh’s.

As Ryan backed away from the door, and teacher Jacinta Greene went in search of toys to entice him in, his big brothers Fionn and Daniel revealed that he hadn’t wanted to get out of bed. “He’ll be sound in an hour,” predicted Ryan’s father who attended St High’s when it had 110 pupils. “We’re lucky. It is a great school. They have a new Astro Turf and lots of space,” he added.

A song for the occasion

David and Patricia O’Rourke from Dowra were dropping off junior infant Kyle (4) and his big brother Daniel (8) .

“My biggest heartache is that they are in different rooms and because of the new rules Daniel can’t go in to Kyle if he needs him,” said Patricia.

Daniel, who had written a song for the occasion about being reunited with his two best friends, Darragh and Daithí (“the three best Ds”) sang it with gusto when asked.

Just as upbeat, his father David said that working in a local supermarket meant he was well used to meeting people during the pandemic. “I’m not nervous about them being back. I think we can’t close things down.”