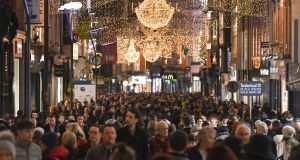 Shoppers on Grafton Street in Dublin. The city council has approved its budget for 2020, which includes a 3 per cent rate increase for businesses. Photograph: Artur Widak via Getty

Dublin City businesses are facing commercial rates increases of almost 3 per cent after a 2020 budget was finally passed by councillors on Monday night.

The move follows the controversial removal by the Government of €8.4 million in rates due from Irish Water which will instead be distributed to other local authorities.

That decision led to a hotly-debated budget proposed by chief executive Owen Keegan to cut spending on community grants and hike the cost of parking, tolls and social housing rent.

Revisions to the budget were proposed by the parties that make up the largest voting bloc - Fianna Fáil, the Green Party, Labour and the Social Democrats.

Passed on Monday, the slightly amended budget will also see a 36 per cent rise in East Link bridge tolls to €1.90 from next April and a 10 per cent hike in on-street parking charges from July. Commercial rates will go up by 2.7 per cent - not as much as the previously suggested 5 per cent but more than the 1.5 per cent proposed by Mr Keegan.

As part of the amendment, the councillors also said money would be provided to investigate taking the waste service back into council control from private operators, while 25 per cent of the roads maintenance budget would be directed toward cycling safety.

Fianna Fáil’s Deirdre Heney, outlining the proposals, said local authority rents would not be increased and €100,000 would go towards clawing back arrears.

Monday’s debate continued to focus on the Government’s decision to reduce Irish Water rate contributions from its properties by more than €8 million.

In a response to a letter from Lord Mayor Paul McAuliffe, Minister for Finance Paschal Donohoe said the money was a very small proportion of the overall city budget.

“This should not be, and with your leadership, will not be the cause of any increased charges or decreased services,” he said. “It falls to members in each [local] authority to make the appropriate decisions.”

Independent councillor Nial Ring said the letter was “the most contemptible piece of paper I have ever seen” while Green Party councillor Michael Pidgeon said the Government “have left our city with a large hole in the city finances”.

The issue of the 3 per cent rate hike was also divisive. Independent Mannix Flynn said it threatened to impoverish small businesses while Cllr Damian O’Farrell said he would not support the budget on that basis alone.

“We seem to be using our commercial rate payers like kicking balls - using them to embarrass the Government,” he said.

Speaking before the council meeting, Neil McDonnell, chief executive of the Irish Small and Medium Enterprises Association (Isme) said rate-payers were seen as “a soft touch, the path of least resistance” in terms of revenue-raising.

Meanwhile, a report from deputy chief executive Brendan Kenny addressed the ongoing controversy around the development of O’Devaney Gardens, suggesting works could get underway within a year.

Independent councillor John Lyons complained that elected representatives did not have the chance to vote on the disposal of the land to the developer Bartra but this was contradicted by Mr Kenny’s report.

“Following on from the necessary approval given by councillors at the November meeting we immediately began intensive discussions with the developer which included legal advisors from both sides,” Mr Kenny wrote.

A development agreement could be signed within two weeks. Bartra will then have six months to apply for planning from An Bord Pleanála, a process that should take between four and six months.

“If successful the developer will then begin construction straight away,” Mr Kenny wrote. The council is currently setting out plans to seek expressions of interest from approved housing bodies to buy “a significant number” of the units.

Councillors held a special meeting on Monday to debate the situation and moves are underway by a number of opponents, including Mr Lyons and Sinn Féin, to have the plan overturned.

Mr Kenny warned, however, that any such u-turn would have “back to the drawing board” consequences.

“It would take three to five years at best to get to the stage the project is now at and it could be 10 years before completion,” he noted.

The future of the O’Devaney Gardens redevelopment, and moves to abandon the current deal, is due for further debate at next week’s council meeting.