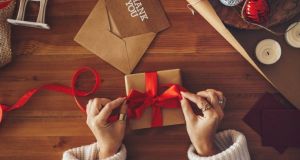 ‘People are buying their Christmas presents now — just sign the commencement order and protect those people, so they won’t run the risk with vouchers,’ Robert Troy said. Photograph:iStock

Christmas shoppers buying gift cards and vouchers are being put “at risk” by the Government stalling a new law to regulate the multi-million euro trade because of a publicity stunt planned for Black Friday, it has been claimed.

Fianna Fail’s business spokesman Robert Troy said there is “no possible good reason” why the long-awaited Consumer Protection (Gift Vouchers) Bill can not be enacted before this Friday, one of the busiest online shopping days of the year.

The legislation regulating the €600 million trade for the first time in Ireland will force traders to accept gift cards and vouchers for at least five years after they have been purchased. It was signed into law last Tuesday by President Michael D Higgins.

However, Minister for Business Heather Humphreys will not “commence” the law until November 29th — almost two weeks later, a spokesman told the Irish Times.

The Minister has to sign a commencement order to formally enact the legislation and that order “is currently being drafted by the OPC (Office of the Parliamentary Council).”

“As such, the situation remains somewhat fluid,” he said.

“Nevertheless, Minister Humphreys intends to make an announcement on this in the coming days.”

Mr Troy said the government had to be “dragged kicking and screaming” to introduce the legislation, in response to private members business, and was still delaying it despite the President having signed it into law.

“This is not what you’d call a complex piece of legislation,” he said.

“We’ve been waiting 18 months for this bill to go through the Oireachtas, there was no need for it to take that long, and even now with it having gone through with full support of the Opposition, they are delaying it further to exploit it for party political purposes instead of just commencing the order.

“People are buying their Christmas presents now — just sign the commencement order and protect those people, so they won’t run the risk with vouchers.”

Mr Troy said the only possible reason for a near two week delay was to get “maximum publicity” on so-called Black Friday, when many retailers hold heavily advertised pre-Christmas sales.

“Wait to you see on Friday, there will be a whole big deal about the commencement order being signed, while people’s money is being wasted because their vouchers will not have the same protections, because the legislation is not retrospective,” he said.

“It is hallmark of this government’s attitude to everything — PR over substance.”

Mr Troy said the delay is “potentially putting a lot of consumers at risk.”

“I was just talking to a friend who had to do his Christmas shopping last Saturday because he is busy with parties and what have you over the coming weeks,” he said.

“People are doing their shopping now, people are buying vouchers now and they won’t have the benefit of this new legislation. The only reason the government is stalling it, is to use Black Friday for political gain and enhance the PR opportunities for them.”

Until the legislation is enacted, shops remain free to put expiry dates — some lasting as little as three months — on the popular gift choices.

The new law will also oblige businesses to give change or a credit note for the difference when purchasing something of lesser value than the voucher. This will also have a five-year lifespan.

Industry sources, according to the Department of Business, have suggested the annual value of gift voucher sales is around €600 million.

Further estimates that 15-20 per cent of vouchers are never cashed in suggest Irish people squander around €120 million every year by not redeeming them.