Insurance should be ‘no barrier’ to reopening childcare, says Zappone 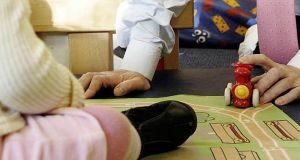 The Minister is expected to bring a memo to cabinet on Friday on certain measures relating to reopening of childcare. File photograph: Edmond Terakopian/PA Wire

The main insurance underwriters and brokers covering the childcare sector have indicated there should be “no barrier” to reopening childcare services at the end of June, according to Minister for Children Katherine Zappone.

In a letter sent on Wednesday to providers, Ms Zappone wrote that Allianz “has agreed that there will be no Covid-19 exclusion on insurance policies”.

“All covers will be in place as per their existing policies, provided they follow the guidelines and back-to-work protocols issued by the relevant authorities,” Ms Zappone wrote.

She also told providers that assurances had been given by Arachas, the insurance broker which provides services to many operators in the sector. Earlier this month, a letter from Arachas raising concerns about the extension of insurance to operators in the sector partaking in a dedicated scheme for healthcare workers was among the factors that led to that scheme being shut down.

“[Arachas] have advised DCYA [the Department of Children and Youth Affairs] that, from the insurance point of view, there should be no barrier to the reopening of childcare services on the 29th of June,” she told the providers.

The circular also outlines more detail about the proposed “play-pod” system, which would result in children being placed with the same teachers and the same group of children in the same physical location every day. This is in an effort to minimise the risk of infection, and also to allow the containment of an infection and facilitate contact tracing if one occurs.

The providers were told that “as far as possible, there should be no contact between two ‘play-pods’ . . . [they] should remain apart in shared space and during drop off and collection times.”

Large rooms, the document says, may contain more than one play-pod, provided there are partitions that prevent physical contact between them. Toys should not be shared and staff from different pods will be asked to maintain social distancing.

The document states the maximum size of a play-pod – which will be key for many operators, who are trying to establish their capacity and how the space of their premises may be adapted – will “be confirmed in the coming days”.

Ms Zappone is expected to bring a memo to cabinet on Friday on certain measures relating to reopening of childcare, including play-pod sizes.

Elsewhere, Siptu has published the results of a survey of 6,000 early years professionals on reopening. It showed that for early years educators, the biggest issue was social distancing, raised by 81 per cent of respondents, followed by the quality of interactions with children (74 per cent).

Among managers and owners, financial sustainability was the biggest issue cited (79 per cent of respondents), followed by the issue of reduced adult/child ratios, raised by 74 per cent.