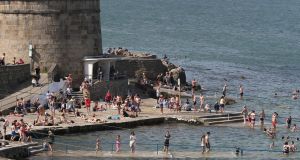 Apart from the blinking roadside sign telling everybody to exercise within 5km of their homes and keep 2 metres away from others, it could be any hot day at Sandycove Beach and the Forty Foot bathing spot in south Co Dublin on Thursday.

As the Irish Ferries Ulysses pulled out from Dublin Port and made its stately progress across the bay beneath a cloudless sky, it was almost possible to believe that all was well with the world.

But the Perspex glass at the hatch of the ice cream van and the yellow Covid-19 signs telling people bluntly to “swim and go” were pointed reminders that all is not as it should be.

There was a school’s out vibe among the teenagers who queued to jump off the rocks at the Forty Foot into the bracing water below. School’s been out since March for them, of course.

This was one of the hottest days of the year so far, with the temperatures hitting a high of 26 degrees in the afternoon.

One teenager, who declined to be named for obvious reasons, had come from Lucan on his bicycle to join his friends at the Forty Foot. He and his pals gathered together to take photographs and mess around.

There appeared to be little evidence of attempts to social distance. The bike stands at the Forty Foot were full and so were the changing areas.

If everything was back to normal, friends Laura McHugh and Lara Hughes, who do live locally and are 15, would be studying for their Junior Certificate in Mount Anville and cursing the “exam weather”.

But on this sunny day they jumped into the Forty Foot together.

A few gardaí patrolled the way. At Howth, another beach mecca for Dublin’s teenagers, gardaí were turning people away from the Dart who did not live locally.

Regular John Hanaphy, who swims at the Forty Foot most days, said he was delighted to see so many people about, “as long as they stay away from me”.

The hot weather has tempted many to venture outside to nearby Seapoint and other popular swimming and sunbathing spots and so the Irish Pharmacy Union (IPU) has issued advice to people to apply sun screen.

The weather is promised very fair for the coming Bank Holiday weekend. According to Met Éireann, warm and mostly dry conditions will continue through the weekend, and current indications are that it will remain mostly if not completely dry up to and including Thursday of next week.

Forewarned is forearmed, she added.