PSNI questioning man (54) over incidents, as clubs says ‘Our door remains open to all’ 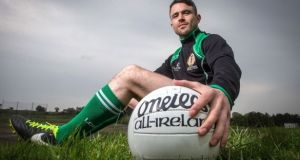 A number of bomb alerts did not deter the newly formed East Belfast GAA club from pressing on with its first hurling game this week.

The message from the club, which has a strong cross-community ethos, was: “Our door remains open, to all.”

That is reflected in its logo, which is a black hand of Ulster and the yellow Samson and Goliath cranes of Harland & Wolff in east Belfast, as well as in its motto, “Together”, written in English, Irish and Ulster-Scots.

The club, possibly wisely, is keeping a low profile and refraining from comment at the moment but its president, Linda Ervine, in a social media post, acknowledged that Thursday, the day of the match, “didn’t get off to a good start” as a result of the incidents.

But, she added, it “ended on a high” after its senior hurling game in the Betsy Gray Shield competition against Warrenpoint went ahead as planned in east Belfast.

Warrenpoint won 2-17 to 1-14, which as far as Ms Ervine, an Irish-language enthusiast from a loyalist background, was concerned was a very creditable result, particularly for a first outing, particularly for east Belfast – which, as Micheál Ó Muircheartaigh might say, is not a “hurling stronghold”.

On Friday the PSNI was continuing to question a 54-year-old man about security alerts over Wednesday and Thursday that were suspected of being aimed at the new club.

Following a search of a house in the Braniel area of east Belfast on Thursday night, he was arrested on suspicion of a number of offences, including possessing and making explosives in suspicious circumstances, and of intimidation,

As the club does not yet have a club house or premises it frequently uses public fields in east Belfast to train. Its game against Warrenpoint was played on the pitch of Our Lady and St Patrick’s College at Knock in east Belfast.

Three cars, two in east Belfast and one in west Belfast, together with three items that were placed on them, were recovered for further forensic analysis, police said.

“We believe these incidents, which are being treated as sectarian hate crimes, are linked,” said Chief Superintendent Jonathan Roberts.

“I am urging anyone who was training with East Belfast GAA club, or anyone else who had a parked vehicle at the playing fields or surrounding area to check on and around their vehicle and report anything suspicious immediately to police,” he added.

Naturally, all this has caused disquiet at the club. But it hasn’t weakened their resolve. It posted a few tweets about the incident but later far, far more postings about how the game against Warrenpoint was progressing, focusing on the sport and accentuating the positive.

The club emphasised how its door remained “open to all” and pledged to continue to develop as a fledgling GAA club, the first in east Belfast since very early in the Troubles.

It thanked the PSNI and its “playing members, who behaved impeccably during the situation”.

“The creation and maintenance of a safe environment for sport to be played by all and the safety of our members whilst playing remains a priority for us all,” it added.

“The club intends to continue to work with the police, the community in east Belfast, and the public at large, whose support we have enjoyed on a daily basis, to ensure the continued safety and enjoyment of our members and patrons.”