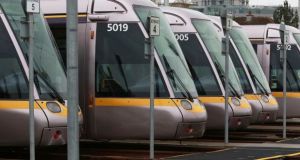 The journey time from Ballincollig to Mahon is expected to be 47 minutes. Photograph: Nick Bradshaw

Consultants have been appointed to come up with initial designs for an east-west Cork Luas line from Ballincollig to Mahon Point.

Transport Infrastructure Ireland (TII) and the National Transport Authority (NTA) announced that Jacobs Engineering had been awarded the contract to analyse route options and develop initial designs for the light rail, which is also an objective of the the Cork Metropolitan Area Draft Transport Strategy 2040 .

The proposed Luas scheme will provide “a high-capacity, high-frequency public transport link from the eastern to the western suburbs”.

It will link the Cork Institute of Technology, Cork University Hospital, University College Cork, Kent station, the docklands and Mahon with the city centre as well as the proposed Cork Science and Innovation Park.

While the consultants have just been appointed to analyse route options, they are likely to be closely aligned with the Metropolitan Area Draft Transport Strategy, which predicts a five-minute service calling at 25 stops across 17km and carrying up to 46 million passengers.

TII chief executive Michael Nolan said light rail had proven itself in many cities, including Dublin, and TII was very enthusiastic about the project in Cork.

NTA chief executive Anne Graham said it was clear there was overwhelming support among elected representatives in Cork for the measures contained in the transport strategy.

“It was also clear to us that if the strategy is to remain a credible document in the eyes of people in Cork, it is essential that progress is made on the delivery of the key elements, sooner rather than later” she said.