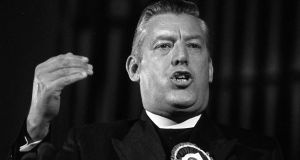 Ian Paisley was reportedly left cowering in a car as he waited for a burger and diet coke outside a takeaway in Slane, Co Meath. Photograph: PA Wire

Ian Paisley was left cowering in a car as he waited for a burger and diet coke outside a Co Meath takeaway on a rare trip across the Border, 1987 state papers have revealed.

The unedifying scene played out as the DUP leader was nervous about being spotted by locals in Slane, Co Meath, as he journeyed to Dublin for the trial of his party colleague Peter Robinson.

Inside the burger joint, Paisley’s close associate the barrister Desmond Boal felt it necessary to deny it was the firebrand preacher and staunch unionist leader.

“Nervous that he might be recognised, Paisley huddled inside the car in the car park while Boal went in to order hamburgers and Diet Coke for the DUP leader,” an Irish government official reported.

“In the meantime two local youths spotted Paisley in the car. Hotly denying (to their obvious amazement) that the occupant of the car was Paisley, Boal was forced to grab the food and to flee the scene without further ado.”

According to the documents, released under the 30 year rule, Paisley and Boal made the lunchtime stop while on the old N2 road to Dublin where Robinson was on trial for the bizarre “invasion” in Clontibret, Co Monaghan the previous year. He had been part of a group of loyalists opposed to the Anglo-Irish Agreement who crossed the border at night and vandalised a number of buildings in Co Monaghan village while also attacking gardaí.

The story about Paisley’s stop-off had been doing the rounds of legal circles in Belfast. One of those who picked up on it was solicitor PJ McGrory who passed the anecdote on to an official in the Department of Foreign Affairs, who in turn reported it to tanaiste Dick Spring and minister for justice Alan Dukes.

McGrory told the official there was a rumour Paisley and Boal had “deliberately tried to ‘set up’ Robinson” by persuading him to enter a plea of guilty over his trial for Clontibret.

“Thus, Robinson could be attacked for having fallen below the standard set by Paisley, who never pleaded guilty whenever he was arrested,” the report read.

Another diplomat went on to criticise how the entire Clontibret affair had been handled.

In a note for his superiors, he said Robinson was shrewd and clever and that the charges and the “extraordinary bail” set down in Ballybay District Court had reinforced unionist prejudices about the Republic.

He said it made Robinson “a hero among his own”.

The officials said it would have been more sensible for gardaí to have released Robinson after he had been caught.

“This would have sent him off with his tail between his legs,” he said.

The documents can be read in files in the National Archives under reference 2017/4/67. - PA