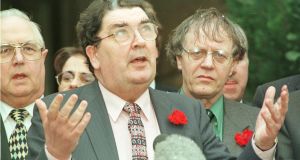 John Hume at the announcement of the Belfast Agreement in 1998, a deal he roughly outlined to British officials eight years earlier. Photograph: Alan Betson

The evolving political views of SDLP leader John Hume engaged the close attention of the British secretary of state for Northern Ireland, Peter Brooke, and his senior officials in 1990, newly declassified files show.

Significantly, the nationalist leader’s ideas broadly anticipate the outline of the Belfast Agreement of 1998.

The previously confidential minutes of the two key meetings with Hume are contained in declassified files released by the Public Record Office in Belfast.

On March 6th 1990, the deputy undersecretary of the Northern Ireland Office, Ian Burns, reported to ministers on a meeting with the SDLP leader at a location near Derry.

Burns noted that “Mr Hume wanted to talk about the importance of the recent statements by Martin McGuinness”, then a leading Derry republican.

The SDLP leader accepted that making political progress through inter-party dialogue was equally important, Burns noted, but felt that the prospect of the Stormont talks between the unionists and the SDLP was “putting pressure on the Provisionals”.

The official observed that the SDLP leader was “less agitated than last week” and indulged in “vintage Hume” with “a lot of re-explanation of his political philosophy”. Overall, he seemed “more relaxed about the prospect of inter-party talks than the Irish government”.

Hume had made several important points, Burns reported. He was explicit that his proposal for “a double referendum” (in the North and South) after any constitutional agreement had been reached would “mean a referendum that was capable of altering article 2 of the Irish Constitution”.

This followed the Supreme Court’s ruling in the McGimpsey appeal on March 1st, 1990, that articles 2 and 3 of the Constitution were a “constitutional imperative” to a united Ireland.

The SDLP leader told the official that he could not understand why the unionists did not appreciate the significance of his referendum suggestion.

When “goaded” by Burns about his proposals for political development, Hume offered “a torrent of detail”, including some involvement in power for both communities. He seemed to “deliberately avoid” the term “powersharing”, as used in 1973-74, stressing that there would have to be a new North-South relationship, “embracing the devolved administration and, perhaps, some sort of Council of Ministers”.

Hume’s outline of his political thinking was of sufficient interest to Brooke for him to arrange to “bump into” the SDLP leader – in the words of Brooke’s secretary – at Hume’s room in the House of Commons on March 29th, 1990.

In a “Note for the Record”, Brooke’s private secretary, Stephen Leach, wrote: “No-one else was present but the Secretary of State” who had subsequently debriefed Quentin Thomas of the Northern Ireland Office and he on what had occurred.

Leach noted that it had been intimated to the Northern Ireland Office that Hume’s deputy, Seamus Mallon, was aware of the meeting and “was rather suspicious of Mr Hume’s and the Secretary of State’s motives”. Without alluding to this intelligence, Brooke began “telling Mr Hume that, if questioned, he would say that he was interested in hearing from the SDLP leader about his recent US trip”. Hume was “entirely content with this”.

Brooke told the SDLP leader that he had heard of his recent political conversations with his Northern Ireland Office colleagues Richard Needham and Brian Mawhinney. However, “he had never personally had the opportunity to hear Mr Hume explain his political strategy and would much appreciate if this were possible”.

Responding, Hume said he really had two strategies. “The first was posited on reaching agreement with the unionists. This would clearly have to involve at an early stage conversations between the unionists and Dublin”. He had agreed with then taoiseach Charles Haughey that if a satisfactory understanding on new institutions of government for the North could be reached with the unionists, “then articles 2 and 3 would definitely be on the table in the unionist/Dublin discussions”.

Ranging more widely, Mr Hume said “that the emphasis on territory in unionist political attitudes (and in the Irish Constitution) was a debilitating obstacle to progress; he wanted to focus attention on a potential union of people, not of land. But for this to happen, the unionists needed to define themselves in a positive way rather than relying on the old negative stereotypes (‘No surrender’, ‘Not an inch’, etc).

“The negative philosophy which unionists had become wedded to was a travesty of an essentially creative people – from whose stock, for example, 11 US presidents had emerged.”

Hume said that if his first strategy came to nothing, he would fall back on the alternative which would be to promote an all-Ireland forum, chaired by the taoiseach, to which all political parties in Ireland – including Sinn Féin – would be invited.

“Of course the unionists would not come but he was confident that Sinn Féin would and that the IRA would as a preliminary declare a ceasefire.”

Among unionists, Hume believed that “Dr Paisley was a good deal more flexible and more positive-minded than Mr Molyneaux [the Ulster Unionist leader]”.