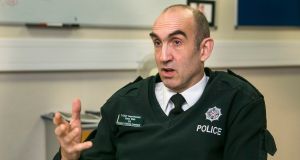 PSNI Chief Superintendent Simon Walls said criminals were exploiting the fact people were now used to the concept of making friends with people they had never met before. Photograph: PA.

A woman in Northern Ireland has lost tens of thousands of pounds to an online scammer who promised her a cut of a phoney gold deal.

The money paid out by the woman across an extended period amounted to most of her life savings, a senior police officer revealed.

Police Service of Northern Ireland (PSNI) Chief Superintendent Simon Walls said the scam was part of a recent flurry that have used Facebook and Google Hangouts to target people in the region.

“The consequence for that person is they have lost tens of thousands of pounds,” he said.

After cultivating a relationship, they ultimately ask their targets to invest in their attempt to move either diamonds or gold out of a foreign country, with the promise of a percentage of the haul’s value.

He said the local victim felt she had developed a real friendship with the criminal.

“In this case the money was provided over a period of time. We are talking about significant amounts of money,” said the chief superintendent.

“This person lost most of their life savings.”

Mr Walls heads the PSNI’s efforts to tackle scams, whether they be online, by phone, mail or face-to-face cold callers.

He said in recent times the majority of new reported fraud types were online-based.

The officer said “So many of us are online, so many have social media apps on our phone, so many are comfortable with that type of interaction with people,” he said.

Mr Walls urged people to adopt a “healthy paranoia” with any unsolicited approach.

Mr Walls said other recent scams reported in Northern Ireland include bogus emails purporting to be from Apple informing people that their account has been locked and asking them to click on a link to re-access it.

The link is instead a phishing device to extract information from computers.

He said a similar tactic was used by criminals sending out fake emails claiming to be from retailer Banana Republic, telling recipients they need to click on a link to arrange for the home delivery of a pending order.

“We certainly have seen no let-up in the amount of scams that are taking place,” the officer added.