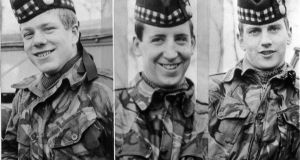 Three British soldiers John McCaig 17 (L) his brother Joseph, 18 (R) and Dougald McCaughey (23) had been drinking in a Belfast city centre pub when they were lured to their deaths by the IRA. Photograph: PA

A former British paratrooper who became a Provisional IRA member has been named as being centrally involved in one of the most notorious episodes of the Troubles – the killings of three off-duty British soldiers in Belfast in 1971.

The three – 23-year-old Dougald McCaughey from Glasgow and brothers John (17) and Joseph McCaig (18) from Ayr – had been drinking in a Belfast city centre pub before being lured to their deaths by the IRA.

Their bodies were discovered by children at Ligoniel in north Belfast on March 10th, 1971. No one has been convicted of the murders.

A BBC Spotlight programme broadcast on Tuesday night cited a number of sources who claim that Paddy O’Kane, who served in the British Parachute Regiment and is believed to have joined the Provisional IRA at the start of the Troubles, drank with the three soldiers before taking them away to be killed.

The programme also addresses reports from the time about women also being involved in luring the soldiers to their deaths – a so-called honey trap.

Members of the O’Kane family and a former member of the IRA told Spotlight that Paddy O’Kane said he was involved in the murders. It also reported that the RUC at the time had identified O’Kane as one of the chief suspects for the killings, and that a work colleague of his had seen him drinking with the soldiers. O’Kane evaded arrest and went on the run in the Republic, where, according to the programme, he was “very active” in the IRA for at least another five years.

Former IRA intelligence officer Kieran Conway said O’Kane had spoken openly about the killings. “I believe any man that could execute three young Scottish soldiers in that manner must have been a psychopath.”

The programme also named others who were allegedly involved in the murders. One was Paddy McAdorey, an IRA member who was killed in August 1971 during a gun battle after internment was introduced in Northern Ireland.

It also named Anthony “Dutch” Doherty, who had made a full confession to the killings. That admission subsequently was deemed inadmissible because it could not be guaranteed it was given voluntarily.

Spotlight traced Doherty to Dublin, but he did not want to speak about the killings. His solicitor later contacted the BBC to say Doherty “vehemently denies any involvement” in the murders. Former Historical Enquiries Team detective Dave Hoare, who investigated the killings as a cold case, was dismissive of the suggestion that the soldiers were victims of a “honey trap”.

“There was no evidence whatsoever that they were in the company of women; no women were sighted. To my mind it’s an urban myth, until somebody can bring us some fresh evidence,” he said. Spotlight also reported that “multiple sources” said O’Kane was also a lead suspect for the Kingsmill massacre of January 1976, when 10 Protestant workmen were shot dead by the IRA.

It reported that he was refused an “on the run” (OTR) letter in 2003, but was granted one in 2007. This OTR letter confirmed that O’Kane was not wanted by police in Britain or Northern Ireland.

The murders of the three soldiers who were members of the Royal Highland Fusiliers caused great revulsion, and their impact still resonates today. On the day of their funerals in Scotland, 20,000 people attended a memorial service for them in Belfast.

Memorials to the soldiers in Ligoniel and Ballysillan in north Belfast have been damaged and desecrated numerous times, sometimes with “IRA” graffiti.

After one such incident in 2018, the soldiers’ families issued a statement where they said, “Our boys did not belong to gangs, they did not seek trouble or to hurt anyone, they were sent there to stop two communities from ripping themselves apart and tragically because of this had their lives taken in one of the vilest ways by the people they were there trying to protect.

“Even in death, their memory is being caught up in the crossfire of these twisted people – the constant and deliberate disrespect they are shown must stop immediately.”