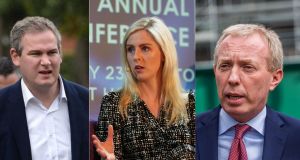 Fianna Fáil’s Lisa Chambers and Timmy Dooley are believed to be in the running for a Seanad nomination while Fine Gael’s Seán Kyne (left) was picked by Leo Varadkar. Photographs: Dara Mac Dónaill, Nick Bradshaw and Jason Forde

Fianna Fáil and Fine Gael are braced for a week of what one party source described as “carnage” as final decisions on candidates for the Seanad election are made because too many former TDs are seeking nominations.

The first deadline is noon on Monday for nominations from outside civic society bodies for the five vocational panels that elect 43 of the Seanad’s 60 members.

As of Sunday, 35 candidates successfully sought nominations from those organisations.

Twelve Fine Gael TDs lost their seats, including Minister of State Seán Kyne who the Taoiseach nominated to the Seanad for its remaining few weeks to succeed Frankie Feighan who won a Dáil seat.

Sources said there would be division within parties as the leadership attempts to select candidates with the best possible chance of winning a Dáil seat in the future.

Fine Gael is focused on securing seats where it has no Dáil representation including Dublin North-West where Noel Rock lost his seat, Carlow, where Pat Deering lost his seat but has an outside Seanad nomination, Waterford, and Tipperary. One of the party’s Dáil candidates in Tipperary, Mary Newman Julian, has secured a nomination from the Veterinary Council of Ireland. She is a sister of Kate O’Connell who lost her Dublin Bay South seat and has been mentioned in dispatches as a potential candidate. But such is the competition that most candidates will only know next weekend if they are on the ticket.

Anyone can seek an “outside” nomination from a range of 110 associations including farming, industrial, cultural, trade union and educational organisations. Those successful in securing such a nomination ahead of Monday’s deadline include Fianna Fáil councillor Aengus O’Rourke, son of former minister Mary O’Rourke, and the party’s former Cork South-West TD Margaret Murphy O’Mahony who lost her seat in the general election.

Co Roscommon councillor Órla Leyden is also nominated following the retirement of her father Senator Terry Leyden after 18 years in the Upper House.

Former Roscommon TD Eugene Murphy is also seeking a nomination from the party after he lost his seat and blamed the two-candidate strategy. Cllr Leyden ran on the ticket with him and both lost out.

Six further Senators are chosen by NUI and Trinity College graduates and 11 are selected by the incoming taoiseach.