‘I’d be a bit eccentric’: Limerick Catholic who loves the Twelfth

‘I am Catholic and I wouldn’t mind becoming an Orangeman,’ says Michael Potter (56) 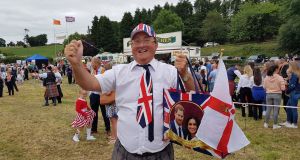 Dressed in a Union Jack hat and tie and carrying a shopping bag emblazoned with images of Prince Harry and Meghan Markle, Catholic Micheal Potter created quite a stir at Twelfth celebrations in Brookeborough.

“You know, I have two Orange sashes, a drum, a couple of sticks and 2½ thousand fridge magnets, and a lot of them are to do with the Twelfth of July.

“I would be a bit eccentric. I have had to cross the Border to get here, but that doesn’t bother me. I would not have missed this for the world,” said the 56-year-old.

He had travelled from his home in Limerick to the small Fermanagh village to watch lodges from the border counties of Leitrim, Monaghan, Cavan and Donegal take part in the parade.

Orangemen from the South accepted the invitation from their counterparts in Northern Ireland to take pride of place at the head of the procession in what has become an annual tradition.

Families sat in cars sharing sandwiches and ice cream, while children laughed as accordion and silver bands bellowed across the street. It was a world away from the troubles in Belfast and Derry in recent days.

“That’s how they do things in Fermanagh,” laughed Potter. “There wouldn’t be any trouble down here and they always make me and others from the south feel very welcome.”

Potter, whose late, “anglofied” mother had Churchill’s famous victory speech read at her funeral Mass, is tickled by the pageantry and colour of the Twelfth and says he likes to blend into a crowd: “When in Rome do what they do or words to that effect,” he laughs.

“I don’t think this should be seen as just a Protestant culture. I am Catholic and I wouldn’t mind becoming an Orangeman. I know several others who would like to as well. I own a collarette and I am not even a member of an Orange lodge. That needs to change.”

Co Fermanagh grand master Stuart Brooker has spent past five years building on the good relations between lodges on either side of the Irish Border. He no longer sees visiting brethren from the South as visitors.

“Firstly we don’t do politics in Fermanagh. At the Twelfth here, we only ever focus on the religious aspect because that is what we are about. We would see the border counties as very much part of the Twelfth now

“We see them as part of us: our neighbours and friends and brethren and sisters and bands together. We are the Grand Orange of Ireland, not of Northern Ireland, ” Mr Brooker said.

Last Saturday he joined hundreds of participants and up to 10,000 spectators at the annual Orange parade in Rossnowlagh, Co Donegal, the county’s only annual march – a situation he hopes might soon change.

“Maybe the Orange Institution would be invited to have a parade in Dublin some time. I think that would be a wonderfully significant step forward, if the Orange brethren in the South were able to parade in the capital city. They have never done that before, so to be invited would be a positive move. These relationships need to be taken forward,” he said.

Nothing will get in the way of cross-Border relations between Orangemen north and south of the Border, said Mr Brooker – not even Brexit. “Our great Orange tradition will continue even if there is a hard border.”

Describing the violence in Belfast and Derry as “completely disgraceful and shameful”, Democratic Unionist Party leader Arlene Foster, who lives near the village, said: “It doesn’t belong to any part of our culture. Those who have been involved in it should face the full rigour of the law,” she said.

Ian Jordan, one of the 14 members of Drumm lodge in Co Monaghan since he was a teenager, has been parading in Fermanagh each year for as long as he can remember, and so have many members of his family.

“It’s hereditary: there are six generations of Orangemen in my family. It’s culture, heritage and it’s important to keep it alive for the next generation and that link between all the counties.”

Mr Jordan (46) believes those making decisions about Brexit and the future nature of the Irish Border need to be mindful of Orangemen.

Joe Morton, county grand master of Leitrim Orange Lodge, said he didn’t even recognise the Border when he travels to the event each year and worries that Brexit “could make a difference” to crossing into the South when he makes the 30-mile trip to his monthly lodge meetings.

Orangeman Mark Trenier from Co Cavan disagrees: “I can’t see that changing. Hopefully it will continue the way it is and there will be no problem getting to the lodge meetings or to the parades.

“We enjoy getting up to the North and meeting people. Sure it’s only once a year,” he said.