Referendum on woman’s place in the home delayed six months 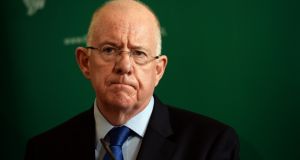 Minister for Justice Charlie Flanagan: offered to meet the committee next week to discuss the matter. Photograph: Eric Luke

A referendum to remove a reference in the Constitution to the woman’s place in the home has been delayed by six months after the Dáil’s business committee objected to the Government’s proposals.

The vote on article 41.2, which references women in terms of “her life within the home”, was scheduled to take place on October 25th, alongside a possible presidential election and a referendum on removing the offence of blasphemy from the Constitution.

However the Dáil’s business committee, which decides the timing and scheduling of legislation, declined to waive prelegislative scrutiny of the Bill to allow the referendum to occur.

The meeting agreed, with the exception of Government chief whip Joe McHugh, that the Bill must go before the Oireachtas committee on justice in September, thereby making it impossible for a vote to occur in October as scheduled.

The dispute centres on the Government’s decision to proceed with the deletion of article 41.2 and contradicting the advice of the Constitutional Convention and the Department of Justice’s internal task force, which both recommended amending the constitutional clause to make it gender neutral.

The Cabinet was notified of the outcome of the meeting and Minister for Justice Charlie Flanagan offered to meet the committee next week to discuss the matter. Taoiseach Leo Varadkar also raised the prospect of bringing the House back early to consider the matter.

However, neither of the proposals made by the Government were agreed as of yesterday. It is now expected it will occur on the same date as the local and European elections next May.

Sinn Féin leader Mary Lou McDonald said there would be disappointment that the referendum was being delayed and that the “sexist, misogynistic” provision would remain part of the Constitution for longer.

However, she insisted this was the fault of Government for not being “on the ball” and for failing to give the Oireachtas the chance to consider these matters before now.

Sinn Féin’s position is that the “offensive and limiting reference” be removed and replaced with “inclusive, progressive language” that values the work of carers, Ms McDonald added.

Article 41.2, subsections 1 and 2, says: “In particular, the State recognises that by her life within the home, woman gives to the State a support without which the common good cannot be achieved. The State shall, therefore, endeavour to ensure mothers shall not be obliged by economic necessity to engage in labour to the neglect of their duties in the home.”

The Constitutional Convention examined this issue and reported to the Government in 2013. Some 88 per cent of members voted against its inclusion in the Constitution. Ninety-eight per cent voted in favour of amending the wording to render it gender-neutral.

A Department of Justice task force recommended similar and advised against deletion as it “would leave no provision in the Constitution to explicitly acknowledge the value of work in the home”.

The Government has instead proposed the straightforward deletion of Article 41.2.

Green Party TD Catherine Martin, who is chairwoman of the Oireachtas women’s caucus, said this was the right decision.

While there was a united view that the current situation was not tenable, Ms Martin said members of the group believed there should be consideration of the alternatives to the Government’s proposition.

Socialist TD Ruth Coppinger said the Government had rushed to make a decision in an attempt to “appear progressive” but in doing so had eliminated the work that went into being a carer.