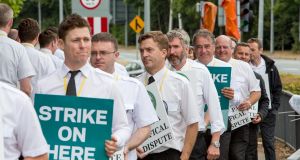 Ryanair pilots, who are members of the Irish Airline Pilots’ Association, on picket duty at Dublin Airport on Thursday. Photograph: Conor Healy

About 100 members of the Irish Airline Pilots’ Association (Ialpa) - part of trade union Forsa - took part in the industrial action, which was the first ever strike by the airline’s Irish pilots.

The pilots say they want a transparent system for dealing with issues tied to seniority and length of service with the company.

Dressed in their uniforms a group of the pilots gathered near the entrance to Dublin Airport from 1am. They stood behind a large banner erected on the roadside and were met with a steady stream of beeping horns and thumbs-up as members of the public showed support for the strike.

People Before Profit TD Bríd Smith, who came to support the strikers, said she would make the case for greater protection for airline workers in the Dáil.

“I’m humbled to be among them today, it’s an historic occasion”.

On Thursday night Ialpa said it had notified Ryanair that it intends to hold two further one-day strikes on July 20th and July 24th, both beginning at 1am.

Ialpa said it and the company had found some common ground in talks on Wednesday on a proposal that a joint working group could help them agree a system for dealing with the pilots’ grievances. However, the sides clashed over the group’s terms of reference.

“On a number of occasions in recent months, there have been suggestions that third-party facilitation could assist in reaching consensus on issues of disagreement,” Ialpa added. “It is, therefore, regrettable that Ryanair management has so far rejected the suggestion of third-party assistance.”

Ryanair said it had encouraged pilots to take up its offer of a working group to deal with the issues but “if they wish to hold another unsuccessful strike again, then so be it”.

The company added that it would contact customers in due course when it received details of the strikes from the union.

Ryanair on Thursday had to cancel 30 of its 290 flights from the State’s airports, affecting about 5,000 travellers. The airline said that 262 of its flights to and from the Republic operated normally and that it had re-accommodated or refunded the customers hit by cancellations.

The company added that the strike by 25 per cent of its pilots had “achieved nothing”.

Around 100 of 350 Irish-based directly-employed Ryanair pilots are members of the union. It is understood that legal difficulties prevent Ialpa recruiting those on contracts.

In a memo to pilots, Ryanair argued that the issues boiled down to annual leave, command upgrades and base transfers.

“On all these issue Ryanair had a written proposal, provided in advance, to which we got no response yesterday,” it said.

It argued the pilots’ proposals were not suitable for an airline with 87 bases and is increasing its fleet by 50 per cent a year.