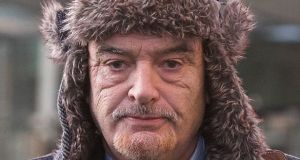 Ian Bailey fears he will die in a French prison if he is extradited to France. File photograph: Damien Eagers/AFP/Getty

Ian Bailey fears he will die in a French prison if the Irish courts allow him to be extradited to France to serve a 25-year sentence for the murder of film producer Sophie Toscan du Plantier.

Mr Bailey (62), who was convicted in absentia in the Cour d’Assises in Paris in May of the 1996 murder in West Cork, told The Irish Times that being extradited to France and jailed there was a very real fear for him.

“Realistically it is a possibility I could end up spending the rest of my days in a French prison,” he said. “Philosophically, we all have hopes and dreams and aspirations but none of us know from day to day what is going to happen.

“Clearly there is a possibility that I might finish up in France and if that happens, just do the sums – I’m 62-years-old and have a 25-year sentence hanging over me, so yes, it is a fear that I have.”

Mr Bailey, a journalist from England, said he feared he was being sacrificed to the French.

Asked if he felt his extradition may become the subject of political pressure from the French, he said he believed the case had always been “political”.

Mr Bailey was twice arrested by gardaí for questioning about Ms Toscan du Plantier’s murder near Schull but was never charged. He has denied any involvement in her killing or that he ever made admissions that he killed her.

The Supreme Court ruled in 2012, on a previous French European arrest warrant , against extraditing Mr Bailey because it was not clear if the warrant was for the purpose of charge but the new warrant says it is to serve the 25-year term imposed in absentia.

The Supreme Court also ruled against Mr Bailey’s extradition on the grounds of reciprocity - in French law France claims extraterritorial jurisdiction outside of the country but Ireland had no equivalent law.

Under French law, which dates from Napoleonic times, France reserves the right to prosecute anyone who commits a crime abroad against a French citizen, thus enabling it to seek Mr Bailey’s extradition for a murder in Ireland.

But the Supreme Court ruled that as Ireland did not have an equivalent provision that allows it prosecute anyone who commits an offence against an Irish citizen outside of Ireland, it could not extradite Mr Bailey to France.

However, some legal sources have suggested that Ireland’s recent ratification of the Istanbul Convention on violence against women may offer the State a means to overcome the reciprocity issue, thus allowing Mr Bailey’s extradition.

But Mr Bailey’s lawyer, Frank Buttimer questioned the timing of Ireland’s ratification of the Istanbul Convention, signing up to the treaty in March – just two months before Mr Bailey was due to go on trial in absentia in Paris.

“It’s not for me to determine why the Oireachtas passes its laws but it’s more than curious to me in terms of the persecution that has been going on of Ian Bailey for 23 years those two events occur within two months of each other.

“And it happens in circumstances where there was no actual legal reason for that to be done – the purpose of that law was to implement a protocol concerning issues of international domestic violence,” he said.