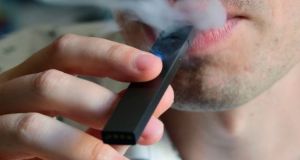 Vaping is as bad as traditional cigarette smoke for exposing users to bacterial lung infections, and is worse in some cases, researchers at Queen’s University Belfast have found.

The study, described by one of its authors as having “phenomenal” public health implications, says bacteria often found in the lungs became more harmful and caused increased inflammation when they were exposed to e-cigarette vapour.

Exposure to both cigarette smoke extract and e-cigarette vapour caused an increase in the potential of bacteria to cause harm in the lungs, in a way which could lead to diseases such as chronic obstructive pulmonary disease and asthma, the research team found.

Bacteria have long been associated with the development of lung diseases such as bronchitis and pneumonia, where smoking plays a role. This study is the first of its kind to compare the effect of cigarette smoke and e-cigarette vapour on key lung bacteria.

The researchers found changes in bacteria exposed to e-cigarette vapour were similar, and in some cases exceeded, those observed following bacterial exposure to cigarette smoke, suggesting that there is little difference between the two.

“This study shows us that vaping may carry the same risk as cigarette smoke in increasing the susceptibility to bacterial infection,” lead author Deirdre Gilpin from Queen’s school of pharmacy said.

Published in the Respiratory Research journal, the research is the latest in a series of studies published this year suggesting vaping may be harmful. Government plans to ban sales of e-cigarettes to minors next year.