Government will not bail out creches, Varadkar says 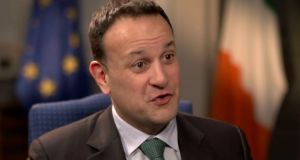 The Government will not “bail out” creches with an insurance subsidy due to rising premium prices, Taoiseach Leo Varadkar has said. Photograph: Screenshot of Pat Kenny interview Virgin Media One

The Government will not “bail out” creches with an insurance subsidy due to rising premium prices, Taoiseach Leo Varadkar has said.

Amid growing concern following the departure of one of two insurance providers to the sector, Mr Varadkar said he was confident creches would not have to close their doors in the New Year.

On Wednesday the Government said it would provide immediate extra funding to crèches, averaging €1,500, but denied it was related to the emerging crisis.

Supporting that position in an interview with Pat Kenny on Virgin Media One, the Taoiseach said he did not believe a State “bailout” was in order.

“As things stand we don’t believe that’s going to be necessary. Allianz are still in the market and there’s the possibility at least that another insurer will come in,” he said, adding that the Allianz rate worked out at about €60 per child per year.

While he would not be happy with a monopoly situation, he said “bear in mind parents all over Ireland are paying a lot for their childcare. For many people it’s the equivalent of the month’s rent or the month’s mortgage all over again. Only €60 a year of that on average is insurance.”

As the Government faces into its final weeks and months, the Taoiseach was pushed on an election date and while predictably sidestepping the question he said he would give it thought over Christmas.

With the Government majority diminished in recent times, Mr Varadkar conceded it might not be in his gift as to when to call an election unless Fianna Fáil moved to support the Government on votes rather than holding the line on abstention. He said he would seek to remain leader of Fine Gael in the event he failed to secure a mandate to form a majority government.

It is the latest in what is likely to be a series of media interviews at the year’s end and Mr Varadkar was probed on a wide variety of perceived Government failures and controversies.

As regards Wexford by-election candidate Verona Murphy, he explained again that while initially forgiving her comments on migrants, he took issue with a subsequent video that claimed she had been the target of a media conspiracy.

“That’s why I recommended tonight that she be removed from the ticket and she has been,” he said referring to a party decision not to put her forward for the forthcoming general election.

As to whether her comments on migrants would resonate with a fraction of the population, he said “I fear that. I fear that may be the case but I hope not enough that we would see the emergence of a far right party in Ireland in the way we have seen unfortunately in other countries.”

Other controversies loitered. On the issue of Dáil expenses and how the system is used by TDs, Mr Varadkar said the system around un-receipted travel and accommodation expenses was “far too lax”.

“Minister (Paschal) Donohoe as the Minister for Public Expenditure will take an initiative on that in the next couple of days, to do a thorough review as to how that allowance works.”

He said he found it “distressing” the Government could not reduce homelessness numbers but that they had done more to build social housing than previous administrations.

With one eye on that election, he said “I think there are a lot of people who will acknowledge that the Government has done a good job ... even in the areas where we haven’t made as much progress as we would have liked I am asking them to trust us to make more progress in the years ahead.”

Brexit too was an unavoidable subject in the wake of the UK’s election and the kind of majority – secured by British prime minister Boris Johnson – the Taoiseach can only dream of. As to his counterpart’s move to impose a December, 2020 deadline to complete Brexit, he said it was a bit of “political poker”.

“By putting that in law, in British law, he is putting added pressure on the European Union and added pressure on his own system to get a trade deal agreed before the end of the year. But bear in mind what he has done is make a change to British legislation; it doesn’t change the withdrawal agreement so it would be open to the House of Commons to reverse that and they could do so within a day,” he said.

“I think he’s plenty smart. And what he wants to do is put the pressure on all of us.”