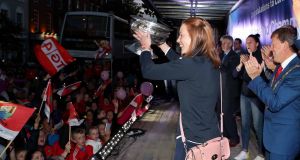 Hundreds of supporters thronged Cork’s South Mall on Monday night to welcome home the camogie team who clinched a record 27th All-Ireland in dramatic fashion at the weekend.

The fans had been waiting eagerly for a glimpse of the Rebelettes all evening and a huge cheer went up as the team’s open-top bus came into view.

But even that cheer paled beside the roar that went up when record-breaking captain Rena Buckley carried the O’Duffy Cup on to the podium.

Her team-mates joined her, including Gemma O’Connor who scored the equalising point and sub Julia White who scored the injury-time winner against bitter rivals Kilkenny.

“It took a superhuman effort to win and the team showed great determination and boundless energy and we congratulate them on their magnificence victory and in congratulating them, we congratulate in particular Rena Buckley, cousin of the bishop!” he declared to loud laughter.

“What an achievement on Rena’s part – yesterday she won her 18th All-Ireland medal between camogie and ladies football and that achievement will remain indelible in the annals of the sporting history of not just Cork, but indeed of Ireland.”

Manager Paudie Murray thanked the fans for their great welcome home before paying tribute to the entire senior panel for their unstinting effort as well as the intermediate panels who drew with Meath and are due to meet them in a replay on October 1st.

“Finally to our captain, Rena – what can i say about her – what a warrior. You know, I drive around the city here a lot and I see the Christy Ring Bridge and the Jack Lynch Tunnel and I think maybe it’s time we name something after her,” he said before also thanking the clubs for their support.

Finally it was the turn of Captain Fantastic, Buckley to say a few words just a year after she captained the footballers to success. She too paid tribute to everyone who had made the trip to Dublin to support them.

“The one thing about this Cork camogie team is we are a very tight unit and I think this year everyone put their shoulder to the wheel and backed everyone up from December all the way to the top of the Hogan Stand yesterday – well done to everyone and I’m so proud of you all.”