Irish Victoria Cross winner to be honoured in Laois hometown 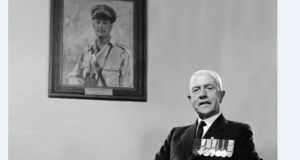 100 years ago this week L-Sgt Jack Moyney from Rathdowney, won the VC for an extraordinary act of endurance.

One hundred years ago this week Lance-Sgt Jack Moyney from Rathdowney, Co Laois won the Victoria Cross (VC) for an extraordinary act of endurance.

He and some men from the Irish Guards found themselves stranded in the hell that was no man’s land during the Battle of Passchendaele in September 1917. For four days Moyney and his men held on to two advanced posts outside Ypres in Nye Copse. He and 15 other men were surrounded by the enemy and were without water and with very little food.

On the fifth day, he ordered his men out of a shell hole and they fought their way to safety.

Moyney was one of two men who held up the Germans while the others escaped. He was awarded the VC in October 1917. The citation read: “It was due to endurance, skill and devotion to duty shown by this non-commissioned officer that he was able to bring the entire force safely out of action.”

The regimental historian, Rudyard Kipling, wrote of Moyney’s exploits. “Twas a dam’ tight place that that Moyney man walked them out of.”

Moyney came back to Ireland after the war and settled in Roscrea, Co Tipperary. He was the last surviving Irish VC winner from the first World War. He died in 1980 at the age of 85. He was one of the few Irish-born soldiers to be interviewed at length about his experiences. In 1978, he told Kevin Myers he believed he was not targeted by the IRA on his return from the war because he had been a VC winner and was therefore too high profile.

Two plaques will be unveiled to Moyney on the centenary of his actions in his home town of Rathdowney, Co Laois on Tuesday.

One plaque is made of Portland Stone and will be supplied by the British government as part of a scheme to honour all 627 men who won the VC in the first World War including 35 Irishmen.

Moyney had six children and has many great-grandchildren and great-great grandchildren, and about 60 of his relatives are expected to attend. His great-nephew Bob Campion dedicated a snug in his pub Bob’s Bar in Durrow to his great-uncle. “Not a day goes by but some visitor comes to visit the snug. Everybody can relate to a VC,” he said.