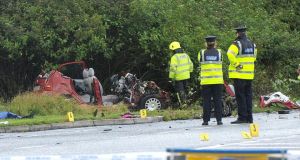 The scene of a fatal car crash on the N17 outside Claremorris in Co Mayo in which three people were killed. Photograph: Conor McKeown. 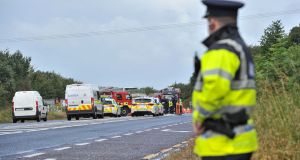 The scene of a fatal collision on the Cork to Mallow Road near Blarney. 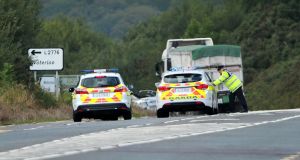 The scene of a fatal collision on the Cork to Mallow Road near Blarney.

Five people have died after car crashes in the south and west of the country.

Two people were killed in a collision near Blarney in Co Cork and three others – including a child – died after a crash near Claremorris in Co Mayo.

The Co Mayo incident occurred on the N17 at about 1pm. The three victims – from across three generations of the same family – were travelling in a car which collided with a truck at Lisduff, about a mile from Claremorris.

Emergency services rushed to the scene but said there was nothing they could do to save the three victims – women in their 40s and 70s and a boy (7) – who were pronounced dead at the scene.

The driver of the lorry was treated for shock following the crash.

Diversions are in place on the N17 – which links Sligo to Galway – while gardaí carry out a forensic examination of the crash scene and the vehicles involved.

Members of Mayo County Council heard of the news as they gathered for their monthly meeting in Castlebar and a minute’s silence was held for the deceased.

In Cork, two tourists travelling in a hire car were pronounced dead at the scene of a collision with a truck on the N20 road between Cork and Mallow.

The crash happened just north of Blarney at around 11am. The pair, who were in their 60s and from the US, were both passengers in the Skoda Octavia car.

The car was travelling towards Cork when the collision happened at the Waterloo junction. The truck was moving in the opposite direction.

Two other people in the car – an American man and woman in their 60s – were taken to Cork University Hospital with injuries that were not life-threatening. It is understood that the four were related.

Their car was pushed into the path of a Peugeot coming from Waterloo with which it collided. The pregnant woman who was driving the second car was taken to hospital as a precautionary measure.

The driver of the truck, a man in his 30s, was badly shaken by the collision and he was also taken to Cork University Hospital but it’s understood that his injuries were relatively minor and he was treated for shock.

Gardaí are trying to make contact with the families of the dead through the US embassy.

A section of the N20 was closed while the scene of the crash was examined by Garda forensic crash investigators.