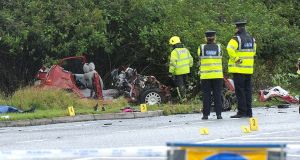 The scene of the fatal car crash on the N17 outside Claremorris, Co Mayo. Photograph: Conor McKeown

Three members of a Co Mayo family and two American tourists were killed in two separate road crashes on Monday on what was the worst single day this year for road fatalities.

The victims of the Co Mayo crash were named locally on Monday night as Marcella Wilson (in her 40s), a single mother who lived in Belmullet, Marcella’s six-year-old son Sean and her mother Mary Ann.

Marcella is understood to have been the driver of the Citroën car which collided with a northbound articulated lorry on the N17 at Lisduff near Claremorris at about 1pm.

Her mother lived in the townland of Cross, Binghamstown, on the Erris Peninsula, with her husband, Josie.

The three victims, who are believed to have been travelling to Galway, died instantly in the crash. The driver of the lorry was treated for shock by medical rescue teams following the incident.

The victims’ car had emerged from the link road to Claremorris onto the N17 when the collision occurred.

In Co Cork, gardaí have appealed for witnesses to a road traffic incident on the main Cork-Limerick road which claimed the lives of two American tourists, when their hire car was involved in a collision with a truck.

The two, a man and a woman in their 60s, were among a party of four Americans visiting Ireland who were driving from Mallow towards Cork when they went to turn off at the Waterloo junction for Blarney at about 11am.

The two American couples were turning off the N20 when they were in a collision with a truck travelling from Cork towards Mallow. The tourists’ hired silver Skoda Octavia was then pushed into the path of a Peugeot coming from Waterloo and seeking to enter onto the N20, with which it also collided.

Gardaí said the death toll of five was the worst for any day in 2017, bringing the total number of fatalities on the roads this year to 109.