Congregation, including fans from around world, told singer ‘brought joy to the lives of so many people’ 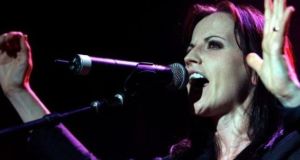 Dolores O’Riordan was found dead in a bath in her room at London’s Park Lane Hilton on January 15th, 2018 aged 46. Photograph: EPA

The Cranberries singer was found dead in a bath in her room at London’s Park Lane Hilton on January 15th, 2018 aged 46. An inquest held into her death last September heard she had drowned while intoxicated with alcohol.

Eileen O’Riordan, the singer’s mother, and her granddaughter Katie, each sang hymns from the side of the church.

The Cranberries three remaining members, Mike and Noel Hogan and Fergal Lawler also attended the mass at St Ailbe’s Church, Ballybricken and Bohermore, Co Limerick. A number of the singer’s fans from around the world also attended to make up the 300 strong congregation.

Ballybricken prish priest Fr James Walton remarked how, a year earlier, as depicted in a “beautiful”column by Irish Times journalist Miriam Lord, O’Riordan’s funeral Mass was “not so much a funeral as an enfolding” when the local community came together “to sadly reclaim and bury one of their own”.

“Today, in a similar manner, this small rural community of neighbours and friends, come together once more to remember Dolores and to support her family as they continue to come to terms with their loss,” Fr Walton added.

He said that despite the remote location of the area, with “no village and no nameplate” that “hundreds of people have been visiting this church to pray for Dolores and also making their way to Caherelly Cemetery, now a place of pilgrimage for her devoted fans, to pay their respects to her, and to leave there a memento of their visit.”

Fr Walton said both he and the O’Riordan family have received “thousands” of emails, cards and messages from fans expressing their love for the late rock star and mother-of-three.

“Dolores brought joy, solace, and inspiration to the lives of so many people, and continues to do so, based on the emails that I have received, and the fans that I have met over the past year,” Fr Walton said.

O’Riordan’s “stardom” continues to shine, and The Cranberries’ powerful hit Dreams - which was played last August at Croke Park, at the final whistle of Limerick’s historic All-Ireland victory against Galway, has become the “unofficial anthem of Limerick hurling”, he said.

A number of O’ Riordan’s fans also attended the Mass. Spaniard Enrique Rivas who laid a red head scarf at her grave at Caherelly Cemetery said it was the third time he had made the “emotional” journey from his home in London, since the singer’s sudden death last year.

“Since I was a kid, 10 or 11 years old, I’ve grown up listening to her music. It’s really emotional for me coming here. It was to close the year, coming back to this place,” the 32-year old said. A small group of fans “from all over the world” joined him at the church having met up earlier. “I was here last July so I had the chance to go to the cemetery. I left some flowers and today I will leave my bandana,” Mr Rivas said.