South Dublin County Council says it has no duty of care for families, who have 28 children

South Dublin County Council have announced plans to evict an extended Traveller family with 28 children from a site in west Dublin. 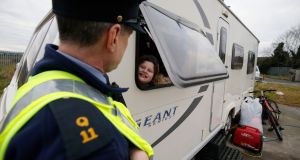 A garda is greeted by a child at a halting site on the Balgaddy Road in Clondalkin, Dublin on Friday. Photograph Nick Bradshaw/The Irish Times.

A stand-off between a Dublin local authority and five Traveller families over their occupation of a council-owned site reached stalemate on Friday as the families refused to leave, saying they had nowhere else to go.

South Dublin County Council (SDCC) say the families, who have 28 children including two toddlers, have been staying “without permission” on an old school site in Balgaddy, Clondalkin since late last year. The site has no electricity or running water, but is fenced off making it safe for young children.

The council says it has no duty of care to the families who came to Clondalkin from the Dublin City Council and Clare County Council areas, and that the site is earmarked for public housing.

A planned eviction was postponed before Christmas to allow the families time to arrange somewhere to go. This followed mediation by the Irish Traveller Movement (ITM) and the Clondalkin Traveller Development Group (CTDG).

The families had agreed to move on Friday but said they did so as they had no alternative. They had hoped to move to another site nearby which has since been blocked off.

At 9.45am on Friday council officials and a number of gardaí arrived at the site. Two of those staying there, Bernadette McDonagh and Martin Doherty, remonstrated with officials saying they would leave but had nowhere to go.

Mr Doherty said: “If there’s a hard stand two miles or three mile from here, we’ll all move off and go. But we can’t pull up on the path of the main road with a pile of kids. I know you’re doing a job. I understand that but we really and truly have nowhere to go. Where can we go?”

The official reiterated the council position: “We reached an agreement that you would voluntarily leave today . . . We had an agreement with your representatives.”

They then went to each of the five caravans, knocking on the doors and telling those who answered that they were required to “vacate [the site] now”, before leaving.

In the end the council did not move to enforce the families’ removal under Section 10 of the Housing Act 1992 and the 2002 anti-trespass legislation.

In a statement, SDCC said: “The council attended the Balgaddy area today to oversee the vacation of the site as previously agreed with the families in accordance with the outcome of the mediation process. However, the families declined to vacate the site unless an alternative site or housing was provided by South Dublin County Council.”

The families say they are now “dreading Monday” as they expect the council to move against them at some stage next week.

Mr Doherty said the families’ greatest concern was for their children.

“Of course we’re worried about our kids. If we pull a caravan to the main road and kid is playing and traffic there, he’s dead. It’s my fault then. I’m his parent and we’re by the side of the road,” he said.

“I feel like these people have no remorse for anybody, that the kids’ welfare means nothing to them. Our back is to the wall now. We have no place to go.”