Miriam Lord: Dolores O’Riordan send-off not so much a funeral as an enfolding

She may have been globally famous, but in Limerick she was one of the O’Riordans 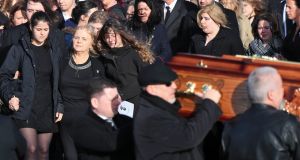 Late Cranberries singer Dolores O’Riordan’s mother, Eileen and daughters, Molly and Dakota follow behind as her coffin is carried at her funeral at the Church of St Ailbe, Ballybricken, Limerick. Photograph: Colin Keegan/Collins Dublin.

In the week since her death, the people of Limerick got plenty of time to celebrate the life and mourn the passing of Dolores O’Riordan, their international rock star.

Thousands queued in inclement weather to pay their respects when she lay in public repose on two successive days. Traffic management plans were put in place. Books of condolences were filled and replaced by the council. The Taoiseach signed one of them. The President visited her family and tendered his sympathies.

What happened next was not so much a funeral as an enfolding, with the small rural community of Ballybricken – where Dolores felt most at home and the place to which she always returned – coming together to sadly reclaim and bury of one of their own. She may have been globally famous, but to them, she was down to earth Dolores – Eileen’s daughter, one of the O’Riordans.

It was from this East Limerick townland that the schoolgirl singer determined she would, one day, conquer the world with her voice and her music. Lots of young girls have that same dream. Dolores O’Riordan, a force of nature, achieved it.

Her sudden death at the young age of 46 shocked the legions of Cranberries fans everywhere, but it hit particularly hard in Limerick. The O’Riordan family recognised this and generously allowed local people the time and opportunity to pay their tributes to the woman who always remained true to her county roots, despite her fame and fortune.

So when the time came for her funeral today, the many who turned out in her honour on Sunday and Monday stayed away from the tiny parish church of Saint Ailbe, where Dolores once played the organ and sang in the choir.

They had paid their respects.

So there was no big crowd on the bend in the road where the church sits under the shelter of Grady’s Hill, not far from the house where Dolores was born. Nor was there a celebrity parade through the churchyard gates. There may have been satellite news vans parked nearby, journalists scanning the Mass-goers and tiered rows of photographers on aluminium stepladders packed behind the low stone wall opposite, but there would be no big send-off to satisfy the national and international media.

Just like her mother, Dolores O’Riordan had a strong faith. Her funeral Mass, which was very traditional, reflected this. Screen out the cameras, the microphones and the notebooks and what was left was an ordinary, reflective and respectful Irish goodbye.

The funeral of this rock star was as far away from rock and roll as you can get.

The local community closed protectively around the family. Lads from the Ballybricken/Bohermore GAA club provided stewarding along the roads. Local houses opened their driveways so people could park. Farmers opened fields in case there was an overflow. 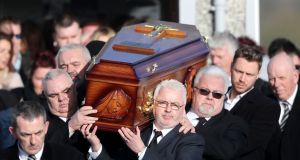 There are only 200 seats in the old church. It is very simply decorated: wooden beams in the vaulted roof and a small alter in front of a crucifix, with a statue of the Sacred Heart on one side and the Blessed Virgin on the other.

There were flowers, white flowers, everywhere. They spelled out the name “Dolores” beside her coffin. Wreaths of white roses and carnations were on the deep window sills, a white candle set in each one, the flames flickering through the stained glass.

There was a frisson among the photographers when Ali Hewson, wife of U2’s Bono, arrived. The band is in America and she was representing them.

President Higgins was represented by his Aide-de-Camp Louise Conlon and Taoiseach Leo Varadkar by his ADC, Caroline Burke.

It was lovely, lovely, wasn’t it really?' said one woman to her friend. 'It was'

The cameras went into overdrive again when the family arrived – Dolores’s mother Eileen; her children – Taylor (20), Molly (16) and Dakota (12), stepson Donny (26) and Don Burton, their father. Her sister, Angela and brothers Terence, Brendan, Donal, Joseph and PJ and their children. And once more when her bandmates entered the church, and when Olé Koretsky, Dolores’s boyfriend, who is in the band D.A.R.K., hurried inside.

There was silence for a little while as the congregation settled, the church full to capacity with the requisite couple of elderly men just about clinging to the outside edge of the porch with their elbows.

Then music began, relayed outside on a public address system.

It’s Dolores. The unmistakable voice of Dolores. Ave Maria rings out over the winter-bare trees and surrounding pasture. It’s haunting and it’s beautiful. And then Luciano Pavarotti, and his tenor tones floating across to Grady’s Hill.

The two stars sang the hymn together at a charity concert in 1995. Princess Diana was in the audience and she said it brought tears to her eyes.

And so it did again today. Not in Modena, Italy, but in Ballybricken, Limerick.

Dolores, said Canon McNamara, had a voice of gold. She had a heart of gold too. He told how it was “impossible” to say how many people Dolores “rescued from darkness and sadness in their lives”.

Now, he said, she is singing in the heavenly choirs.

It was a warm and personal homily. During the communion reflection, the voice of a young Dolores O’Riordan filled the church again. This time, it was Panis Angelicus, beautifully performed. Who wouldn’t be moved?

As the coffin was brought from the church, a familiar chorus started quietly and grew in intensity. When You Are Gone, one of the band’s best-known songs and a poignant reminder of Dolores’s unique vocal talent, played her out as the congregation applauded.

Four pipers from the Limerick Pipe Band, two of them her nephews, played as the coffin was carried to the hearse, the singer’s ex-husband Don and his son Donny among the bearers.

There was a whirring sound in the distance, like agricultural machinery in one of the fields. But it wasn’t. It was a drone, photographing the scene.

Dolores O’Riordan was buried in nearby Caherelly cemetery, next to her father Terence.

People stood around talking afterwards. Just like any ordinary funeral.

“It was lovely, lovely, wasn’t it really?” said one woman to her friend.

“It was. Really lovely.”