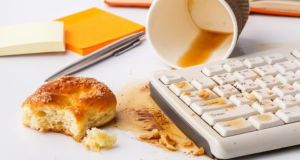 Letters about hot desking to management in the Central Bank from Unite warn of “damage to productivity” and a “huge amount of frustration” among staff.

Unions asked that senior staff in the Central Bank be forced to give up their offices to help tackle a growing capacity crisis at its recently constructed €140 million headquarters.

A shortage of desk space at the new building, which the bank moved to in 2017, has sparked a major industrial relations battle within the Central Bank.

Union sources said 800 staff had been put on desk-sharing arrangements known as “hot desking”, with hundreds more to be placed on the system in the new year.

Letters to management in the Central Bank from trade union Unite, seen by The Irish Times, warn of “damage to productivity” and a “huge amount of frustration” among staff, with unions claiming the bank is in breach of agreements on desk-sharing signed when the Central Bank moved from its old headquarters on Dame Street in the city centre.

One letter sent in July of 2019 outlines a range of measures Unite wants management to take, including “that divisional and senior management vacate all personal offices, as a show of solidarity with colleagues across the bank, enabling such offices to be used more productively by staff”.

It also suggested the bank formally move to a policy allowing staff to work two days per week from home, and that staff be allowed to choose to perform normal duties at weekends if they so wish.

There are currently 1,500 desks in the Central Bank, but unions estimate staff numbers are as high as 1,800 with a further several hundred contractors also operating in the building.

The bank has argued that working patterns mean these workers will never be in the office all at the same time, and therefore has introduced a system whereby there are 100 desks for every 120 workers.

This system is operated by managers who assign desks on a day-by-day basis within the same general area.

A spokeswoman for the bank said “We acknowledge that it takes a little getting used to this new way of working. But we are very confident in the adaptability of our staff to operate the new arrangement effectively.”

However, the changes have caused deep disquiet among some staff, who have asked their union to step in. “The implementation of hot desking has already led to a large amount of concern expressed to us by staff, who are experiencing damage to productivity and difficulty in collaborating with team members, as well as a huge amount of frustration in engaging with the whole process.”

The matter was referred to the Workplace Relations Commission, with unsuccessful talks held at the end of November.

Further talks at the WRC are scheduled for later in January.

However, unions believe the situation will be made worse with several hundred more staff set to be asked to take part in hot desking.

Stances from the union and the bank in relation to the stand-off are expected to harden, with a bank spokeswoman saying the allocation of workspace is “not a matter of collective agreement between the Central Bank and trade unions”.

The spokeswoman said “flexibility” was built into the design for the headquarters at North Wall Quay, which delivers “a modern, progressive and efficient workspace for our staff”.

The Central Bank is currently developing a new office in the new Dublin Landings area, immediately to the north of its new headquarters. It will accommodate staff who work in its Spencer Dock office, which is up for sale. The same working practices will then come into place in these offices, the bank said. “This consolidates all our city centre accommodation into one connected campus and the same progressive design principles used in North Wall Quay will be replicated in the Dublin Landings premises.”