Irish temperatures above average for ninth straight year in 2019 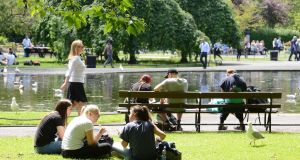 People enjoying the weather in St Stephen’s Green in Dublin in July. Ireland experienced above average temperatures for the ninth year in a rowlast year as a pattern consistent with the impact of global warming continued. Photograph: Dave Meehan/The Irish Times.

Ireland experienced above average temperatures for the ninth year in a rowlast year as a pattern consistent with the impact of global warming continued.

Nearly all mean air temperatures were above their long-term average during the year.

Every year in the previous decade, with the exception of 2010, was warmer than normal, statistics show, with Athenry in Co Galway the only weather station recording a below average temperature (-0.1 degrees) last year.

The highest deviation was recorded at the Phoenix Park weather station, where the annual average temperature of 10.4 degrees was 0.7 degrees above the norm.

The highest temperature of the year, 29.8 degrees, was recorded at Ardfert in Co Kerry on June 27th.

It was a mild year overall with the lowest temperature recorded at Dublin Airport on January 31st, minus 5.8 degrees.

The majority of annual rainfall totals were above their long-term average. In percentage terms, annual rainfall values ranged from 95 per cent of the norm at Sherkin Island, Co Cork to 120 per cent at Athenry.

December was an exceptionally warm month for the time of year with mean monthly temperatures between 0.1 degrees above the long-term average at Markree, Co Sligo and Cork Airport and 1.1 degree above at Claremorris, Co Mayo.

Rising temperatures in Ireland are being reflected globally. When fully analysed, 2019 is expected to be the second or third warmest year on record.

Average temperatures for the five-year (2015-2019) and 10-year (2010-2019) periods are almost certain to be the highest on record. Since the 1980s each decade has been warmer than the previous one and the trend is expected to continue.

The research group Berkeley Earth stated that last year was likely the second hottest year ever recorded globally, surpassed only by 2016. Last year’s average temperature is likely to be 1.1 degrees higher than the pre-industrial period.

The world seems to be getting progressively warmer with temperatures in the last decade up 0.19 degrees on the 2000s.

In 2012, Met Éireann figures revised its long-term averages for Irish temperatures upwards. When the overlapping years between 1981-1990 are discounted, the difference in temperatures between the periods 1961-1980 and 1991-2010 is 0.75 degrees.