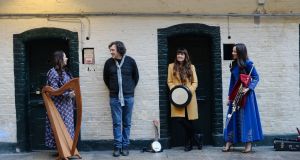 Actor Stephen Rea has said the unification of Ireland is “inevitable” and that conversations about its constitutional future will continue .

“There are things that are happening that are outside the control of politicians. There is a movement of people and the imagination of people,” Rea said at the launch of TradFest at Kilmainham Gaol in Dublin on Friday.

“My view is to stay calm. There is nothing logical about a partitioned island. There is nothing that works about it. Let’s just quietly move on to unity,” said the actor, who was one of the signatories behind the Ireland’s Future petition calling for a Citizens’ Assembly on Irish unity.

Rea made a video last year aimed at Tory politician Jacob Rees-Mogg which highlighted the impact that a hard border would have on Ireland. Following pressure from the Irish Government, backed by the EU, the threat of a hard border has been removed since Boris Johnson became British prime minister.

“One of the last beauties of the last couple of years is that when Irish politicians have the backing of Europe, they have an incredible sense of confidence to tell the British what Ireland needs. This was a big first,” Rea said.

“You saw (Simon) Coveney and (Leo) Varadkar talking with a great deal of confidence and dignity. You only have to look back to how (Margaret) Thatcher dealt with Garret FitzGerald and Charles Haughey. She couldn’t give a damn about them. Now it’s different. They will learn to rue the day that they left the EU.”

Rea, co-founder of the Field Day Theatre Company, is to host an evening in Kilmainham Gaol courthouse in honour of his friend the late poet Ciaran Carson as part of TradFest.

The historic venue will be utilised for the first time during TradFest for a night with musicians Matt Molloy from the Chieftains and Neill Martin.

On January 24th, Rea will read from Carson’s last poetry collection, Still Life, which was written after his diagnosis with incurable lung cancer and published after he died. He will also read from Carson’s novel Last Night’s Fun.

Rea said the reading will be a “nice way to acknowledge the achievement” of Carson. “His work is terrible interesting. We have such great poets. We really do. The work will promote itself.”

Speaking at the launch in Kilmainham Gaol, Rea said so many people who had been incarcerated within its walls had changed the course of Irish history.

He said TradFest had in recent years sought to utilise unorthodox spaces for public performances and the use of Kilmainham Gaol was in keeping with that policy.

“We want people to appreciate not just the music but also our built heritage. We have an amazing natural backdrop of venues,” he said. “We want to celebrate all that is new about folk as well as what is old. It’s about bringing the next generation too.”

TradFest continues from January 22nd to January 26th. During the festival Aoife Scott will launch her new album at the Button Factory on January 22nd.

Daoiri Farrell, who recently won the BBC Folk Awards newcomer of the year, will play Dublin Castle on January 23rd.

Other artists taking part in the festival include The Furies, the Hothouse Flower, uileann piper Louise Mulcahy and folk singer Barbara Dickson.