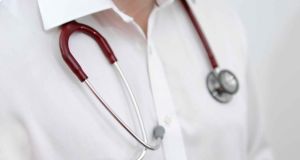 Under existing rules only consultants with a specific type of contract are permitting to treat fee-paying patients in private hospitals. Photograph: The Irish Times

A hospital consultant in the west of Ireland is facing disciplinary action for allegedly breaching rules governing private practice.

A report submitted by the HSE to the Department of Health on compliance with the private practice arrangements said the Saolta group in the west had initiated the disciplinary action against one of its consultants.

The HSE report said the disciplinary action related to off-site private practice by a hospital consultant.

Under existing rules only consultants with a specific type of contract are permitting to treat fee-paying patients in private hospitals.

Other consultants have contracts which allow them to treat private patients only in public hospitals.

Another group of medical specialists can only treat public patients under the terms of their contract.

The HSE report said the disciplinary action by the Saolta group against the senior doctor concerned in relation to off-site practice had originally been suspended until a High Court case involving consultants was resolved.

However the HSE report to the Department of Health said the case “was now actively being addressed”.

The Saolta group declined to comment on the issue this week.

In a statement to The Irish Times the Saolta group said: “We don’t comment on issues relating to individual staff members”.

In the summer of last year the Government reached a €200 million settlement with hospital consultants in a case over an alleged breach of contract.

Consultants took legal action after a decision by the then minister for health Mary Harney in April 2009 not to pay the final phase of increases provided under the terms of the 2008 Medical Consultants’ contract.

He told the Dáil on Wednesday that while there were difficult issues involving the proposals, the Government “should be in a position to make a start on (implementing) it soon”.

He said there had been a good meeting on the issue involving himself, Minister for Health Simon Harris and Minister for Public Expenditure Paschal Donohoe.

“Those private patients might just decide to be public patients.”

He said while there will be a more equal system in our hospitals, removing private patients does not necessarily mean that more patients will be seen or that more operations will be done.

“It just means that there will be more equality in how long people wait for operations and appointments in our hospitals. That is valuable in itself. To say that it increases capacity would not be in line with what is said in the report.”

The Taoiseach said that about €600 million per year of income to our public hospitals would be lost once the plan to eliminate private patients was completed.

He also said the Government would have to negotiate with and compensate consultants for changes to their contract and lost income.