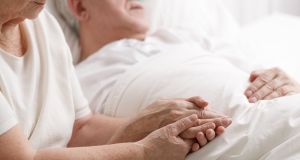 The Irish Hospice Foundation said there needs to be ‘a considered forum to thoroughly examine the proposed legislation’ on assisted dying. File photograph: Getty

The debate around legislation to allow people with terminal illnesses decide the timing of their death must be “robust and balanced”, the Irish Hospice Foundation has said.

Last month the Dáil voted to pass the Dying with Dignity Bill to committee stage by 81 to 71 votes.

The Bill, brought forward by People Before Profit TD Gino Kenny, would allow those with a progressive terminal illness to avail of assistance to end their lives under controlled and monitored circumstances.

On Friday the foundation said there needed to be “a considered forum to thoroughly examine the proposed legislation”.

Foundation chief executive Sharon Foley said the organisation had written to the Oireachtas justice committee, who will consider the Bill before it returns to the Dáil.

Ms Foley said the organisation had urged the committee “to seek out the diverse range of voices, relevant case studies and international research available” on the issue.

“Other countries such as New Zealand and Canada invested in a very thorough consultation and debate process before introducing legislation on assisted dying,” she said. Ireland could learn from how those two countries handled the matter.

“We need to ensure the debate is open, non-exclusionary, and further, that the committee is a safe and effective space, for a wide range of views to be heard on such a complex and difficult piece of legislation.”

Under the Bill a person would have to have their progressive terminal illness verified by two doctors, to be able to avail of assistance to end their lives, an act that carries a 14-year prison sentence. Cervical cancer campaigner Vicky Phelan, who has a terminal cancer diagnosis, has backed the legislation.

The three Government parties were allowed a free vote on the legislation. A motion by Minister for Justice Helen McEntee to establish a special Oireachtas committee to consider the issue and report back in 12 months’ time was defeated.

The hospice foundation said the Bill was a “seismic shift” in policy and the impact of the legislation “on all areas of society cannot be underestimated”.

Ms Foley said the need for more investment in palliative and home care was “long overdue.” Better end of life and bereavement care for people at this “very vulnerable stage” would help address people’s fears and concerns, she said.