Covid-19: Holohan praises ‘dramatic reduction’ in cases among the young 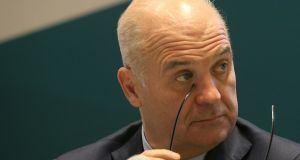 Chief Medical Officer Dr Tony Holohan: ‘We all need to recognise the efforts of our young people and I thank them.’ Photograph: Stephen Collins/Collins

The risk of a Covid-19 patient dying in intensive care in the Republic is less than half of that in the UK, according to data from the National Public Health Emergency Team (Nphet).

Ireland, along with Finland, is one of just two European countries where there is negative growth in incidence of the virus, assistant chief medical officer Dr Des Hickey told the Nphet briefing. In more than half of European countries, the incidence has doubled over the past week.

Over the past week, Ireland’s ranking in Europe for Covid-19 incidence has fallen from 17th to 24th, he pointed out.

“Level 5 efforts over the last two weeks have succeeded in further reducing community transmission and disease incidence in Ireland,” according to chief medical officer Dr Tony Holohan. “However, now is not the time to be complacent. We must keep driving down this disease – we must keep going.”

“They have also halved their contacts in the past five weeks. We all need to recognise the efforts of our young people and I thank them.”

The deaths of another three patients with Covid-19 were reported by Nphet. This brings to 1,933 the total number of deaths linked to the disease.

The reproduction number, which measures how many people a confirmed case goes on to infect, has fallen to between 0.7 and 0.9, according to Prof Philip Nolan, chair of the Irish Epidemiological Modelling Advisory Group.

A reproduction number of less than 1 means an epidemic is dying out; a figure greater than 1 signals it is spreading.

“This is a testament to our collective effort to stop the spread of the virus and it is very good news,” Prof Nolan said. “We may be doing better now but it is conditional on whether we keep it up. If we continue to use this time to drive the infection right down, we will be in a good position in four weeks’ time.”

The average length of stay of a Covid-19 patient in ICU is 17.8 days, officials disclosed.

The lower case numbers can be reduced, “the more value we can get out of that”, Dr Holohan said.

Officials could then look at what kind of additional measures were necessary beyond December 1st to ensure the spread of the disease was limited while restrictions were eased while “preserving” economic activity. While officials were giving ongoing consideration to Christmas, they were not in a position to give advice at this moment.

However, Nphet did not anticipate changing its advice on the closure of non-essential retail over the six-week period of Level 5 restrictions, he said. A review of the current measures is planned after four weeks, but “we’re not anticipating changing our advice during the six weeks”.