Economy recovering faster than expected since May, after historic 15% shrink in Q2 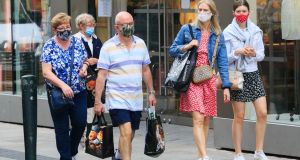 Shoppers on Grafton Street. The coronavirus pandemic dragged the eurozone economy into a historic recession in the second quarter. Photograph: Gareth Chaney/Collins

The European labour market has shrunk by a record amount in the second quarter, when the number of people employed in the EU fell by almost 5 million.

The 2.6 per cent reduction in employment, reported by Eurostat on Friday, underlines how coronavirus has had a dramatic impact on the region’s labour market, after many companies shed large numbers of jobs or placed a significant portion of workers on government-backed furlough schemes.

Eurostat said the loss of jobs was sharper in the eurozone, where the number of employed people dropped 2.8 per cent in the second quarter. It said that the figures for the EU and eurozone were “the sharpest declines observed since [the] time series started in 1995”. Eurostat said last month there were 190.9 million people employed in the EU at the end of the first quarter.

The coronavirus pandemic dragged the eurozone economy into a historic recession in the second quarter, when gross domestic product fell by a record 12.1 per cent from the first quarter. That meant the economy shrank by a historic 15 per cent from a year ago.

Since May, however, there have been signs that the economy is recovering faster than expected. Eurostat said on Friday that exports from the eurozone rose almost a third between May and June, although they remain 10 per cent below the level of a year ago.

Purchasing managers’ indices pointed to a strong rebound in activity for manufacturing and consumer industries across the eurozone in July, fuelling confidence that the region’s industrial output will rebound strongly in the third quarter.

1 Google tells workers to return to country where they are employed
2 Will tracker mortgage be at risk if Ulster Bank closes?
3 Sean Quinn stunned at rebranding of Quinn Industrial Holdings
4 Dublin Bus needs extra funding and more efficient routes to overhaul its image
5 Me & My Money: ‘Money can’t buy you happiness but it can make life a lot easier’
6 Landlords accuse New Look fashion group of exaggerating insolvency
7 Subway bread too sweet for zero rating on VAT
8 Ryanair to take on online travel companies with new site
9 Consumer sentiment still ‘overwhelmingly gloomy’ despite September rise
10 Event organisers call for €17m rescue package in the budget
Real news has value SUBSCRIBE