Deaths remain below 10 per week for six weeks, but case numbers over 100 a week 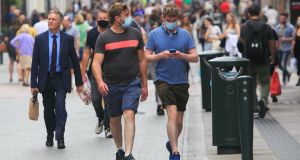 The number of Covid-19 outbreaks in private homes has been rising for five straight weeks, according to the latest analysis by the Central Statistics Office.

The number of deaths from the disease has remained below 10 per week for the past six weeks, but case numbers are over 100 in each of the past five weeks up to August 7th.

The number of new cases doubled that week to 509, compared to 224 in the previous week, the CSO says.

Outbreaks in private homes rose from 13 at the start of July to 83 in the first week of August.

Women, and those aged between 25 and 44 continue to account for the highest number of confirmed cases, while 54 per cent of cases are linked to an outbreak.

Counties Kildare, Laois and Offaly, which have been subject to local restrictions since last weekend, made up two-thirds of all new cases in the week up to August 7th.

This week saw Dublin go 10 weeks with fewer than 100 weekly cases since the start of March. It was also the 10th week Mayo, Westmeath and Wicklow recorded fewer than 10 new cases, and the 13th week Co Leitrim, Co Longford and Co Tipperary kept their tallies below this level.

Co Kerry has now gone 14 weeks recording fewer than 10 cases weekly, and Co Waterford has gone 15 weeks below this number.

Dublin remains the worst-hit county for Covid-19 with 51 per cent of all deaths.

The median age of new confirmed cases was 34 years old at the start of August.

The total number of people who have died from Covid-19 is 1,519, with a further 253 deaths cited as probable deaths linked to the virus. In the first week of August, no deaths were recorded.

The virus has claimed the lives of 23 more males than females, and 64 per cent of deaths are among people aged 80 years or older.