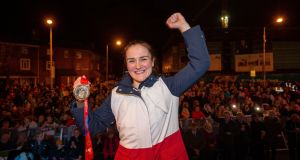 Harrington started boxing with the inner city Corinthians Boxing Club at 16 years old, when by her own admission she was “hanging around and getting into all kinds of trouble”.

On Saturday the north inner city local became the third ever Irish boxer to claim a World Championship gold medal, winning the lightweight final in New Delhi, India on a split decision over Thailand’s Sudaporn Seesondee.

“This is my area, these are the people I grew up with, you have all seen me starting from the bottom, and how I fought my way up to the top,” Harrington told the crowd. “You are the people who know what I went through to get this,” she said, brandishing the gold medal to cheers from the crowd.

“I got into boxing to keep me out of trouble, to come down a different path in life, because you can choose roads that you go down,” she told the crowd. “I took a bit of a turn and I got onto the right road . . . if I can do it, trust me, anyone can do it.”

“She is our hero, and it’s great to have someone like her, a role model for the young people of this area,” Mr Ring said. He criticised Minister for Sport Shane Ross for failing to attend the event.

A spokeswoman for Mr Ross said the invitation to attend the reception only arrived on Monday, and the Minister had an “engagement that could not be cancelled”, but he had sent his congratulations to Harrington.

Dublin Central TD Maureen O’Sullivan said it was “amazing” that young people in the area would have a positive role model in Harrington. “Because they have been lacking really and you know the role models that were there were the negative ones,” she said.