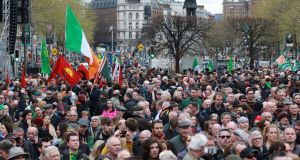 An event marking the centenary of the 1916 Rising. File photograph: Nick Bradshaw

Historians involved in advising the decade of centenaries “point blank” refused a Government request to use the Northern Ireland peace process as a frame of reference.

The chairman of the Government’s advisory committee Maurice Manning said the historians involved wanted nothing do with contemporary political events in Northern Ireland.

He told the Parnell Summer School that politicians knew there had been no percentage for them in terms of votes by attaching themselves to the Rising commemorations and the public were only interested in historical commemoration.

Mr Manning said the Taoiseach Enda Kenny realised from the beginning that the decade of centenaries could pose “huge problems” for the Government.

There was no consensus as to how it should be handled. Mr Manning recalled there had been “all kinds of bad faith” attributed to the Government’s motivations for the commemorations. Those included that the Government was embarrassed by Irish history and that it intended to sanitise what happened in 1916.

Mr Manning said the advisory committee was determined that nobody would be able to hijack the commemorations for party political purposes.

It was important he stated, that it not be co-opted by “some kind of State propaganda machine”.

Mr Manning said the advisory group recommendations were accepted in full by the Government. They included the involvement of schools and local communities, the opening of historical archives and a physical legacy in buildings associated with the Eater Rising.

He suggested the Easter weekend commemorations had demonstrated, in the words of the historian Mary Daly, that Ireland was a country “at ease with its own history”.

Trinity College Dublin historian Dr Anne Dolan questioned the notion that the independent Ireland had not lived up to the ideals of the Proclamation.

She said Ireland was as much about “the valley of the squinting windows as it was about MacDonagh and Pearse. If independent Ireland left behind the radical vision of the Proclamation it did so because it wanted to, because those who conceived that vision failed to consult or fathom those in whose name they presumed to rebel.”

Historian Tom Dunne said he was disappointed that the Irish public still bought into the “700 years off oppression and victimhood”. In reality, he suggested, Irish people lived during British rule in “an advanced democracy, responsive to public opinion, delivering radical reforms in land tenure, local government and education.”

Dr Brian Hanley told the summer school that class had been a big factor in the Irish revolution. It was striking how few urban unskilled workers, farm labourers and women domestic servants were republicans.

“There was of course many republicans from skilled working class backgrounds and a disproportionate number of white-collar workers, but among the leadership in particular a much higher proportion of the educated and middle-class than in the general population. In a society intensely aware of class these differences mattered.”