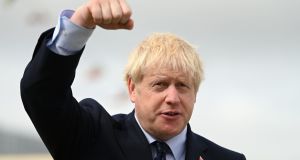 Max Hastings, a former newspaper editor and now a historian, accused Boris Johnson (pictured) and his government of being ‘completely indifferent’ to the fate of Northern Ireland in the Brexit debate. Photograph: Daniel Leal-Olivas/PA Wire.

Britain is not an important country any more and Brexit is being driven by an “almost crazy nostalgia” for the past, the historian Max Hastings has said.

Mr Hastings, who specialises in military history, said Brexiteers were leading “a dash for the past” for Britain in the belief that the country was somehow better before.

“They think that they can rebuild the Britain of the past and that will be great for Britain. I don’t share that view at all,” he said.

“Britain is not an important country any more and we are going to find it difficult. I never suffer from nostalgia. I never kidded myself that it was better to live in the second World War or to live in the time of Downton Abbey. ”

Mr Hastings is a former editor of The Daily Telegraph newspaper and was Boris Johnson’s editor when the now British prime minister was its Brussels correspondent. He said his former newspaper, which supports Mr Johnson, and others in the Brexit-backing press have allowed their papers to act “recklessly and irresponsibly” when it comes to the issue of the UK leaving the EU.

He told RTÉ’s Today with Seán O’Rourke programme that he had not changed his view that Mr Johnson was “wholly unfit” to be prime minister.

“Boris Johnson is peddling a budget of falsehoods and unfulfillable promises which I fear will lead us into terrible trouble,” Mr Hastings added.

“I keep hoping for the sake of our poor country that things would turn out better than I feared they would, but so far there is not much evidence of it.”

In his early days as a reporter, Mr Hastings was based as a correspondent in Northern Ireland.

He accused Mr Johnson and his government of being “completely indifferent” to the fate of Northern Ireland and the British government’s policy towards the North is being driven by “sheer insouciance and carelessness”.

Mr Hasting’s latest book, Chastise: The Dambusters Story 1943, is about the incident that inspired the film The Dambusters, the most famous British film about the second World War.

On the night of May 16th-17th, 1943, a fleet of Lancaster bombers used the famous “bouncing bomb” to breach the Möhne and Edersee dams causing catastrophic flooding of the Ruhr valley.

Of the 130 air crew who took part in the raid, 53 were killed and eight aircraft were shot down. Mr Hastings told the programme that just 32 of the Dambusters’ crew were still alive at the end of the war.

He also said the human tragedies of those who were killed by the tidal wave of water which followed the bursting of the dam have been overlooked. Among them were more than 1,000 women from occupied countries who were working in forced labour camps in Germany at the time.