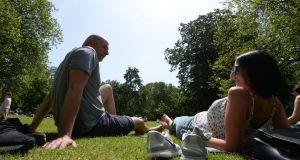 An Indian summer is on its way with temperatures as high as 21 degrees on Saturday and the prospect of fine weather in the second half of next week.

A high pressure area from the Azores is building over Ireland bringing fine and settled weather for the east and south on Saturday which augers well for the All-Ireland final replay between Dublin and Kerry on Saturday evening.

Sunday, which sees the TG4 All-Ireland Ladies senior final between Dublin and Galway in Croke Park, will be a cooler day with the possibility of rain, but temperatures will still be higher than average with a possibility of 20 degrees in sunny spells in Leinster and Munster.

The forecast for Monday and Tuesday is mixed with wind and scattered showers expected, but the picture begins to brighten towards the middle of the week.

High pressure area is set to make its way over the country bringing a return to blue skies and highs of 21 degrees in most places. It will also lead to cold nights under clear skies.

Met Éireann forecaster Deirdre Lowe cautioned that there was still a degree of uncertainty about the outlook for next week, but “it is promising, fingers crossed”.

“It looks like a lot of dry weather and that it will get warmer as the week goes on but it is still a long way off.”