Coveney: Border checks after any no-deal Brexit ‘a temporary arrangement’

Difficult not to be sceptical about British government’s intentions, Minister says 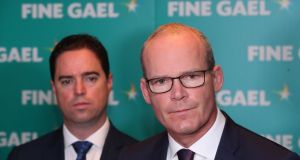 Checks near the Border after any no-deal Brexit will not be permanent, Minister for Foreign Affairs Simon Coveney has said.

Mr Coveney was speaking at the Fine Gael parliamentary party think-in at Garryvoe, Co Cork where TDs have gathered in advance of the Dáil resuming next week.

“We don’t regard those checks that may be needed in a no-deal scenario as a permanent arrangement. Not by a long shot,” Mr Coveney told journalists.

“It is a temporary arrangement to protect our place in the single market while we continue to negotiate for the kind of arrangement on the Irish Border that the British government has committed to in the past in writing to Ireland,” he said.

“And before any trade negotiations can open between the UK and the EU three things must be resolved first – citizens rights issues, a financial settlement and the Irish Border question,” the Minister said.

“So this issue doesn’t go away just because Britain leaves the EU without a deal. It will still be central to the discussions. And anything we do to protect Ireland’s place in the single market is a temporary arrangement,” Mr Coveney said.

Asked about the recent admission by the Taoiseach that there would have to be checks near the Border in the advent of a no-deal – contrary to previous Government assurances – Mr Coveney said the Government needs “to level with people about what a no-deal Brexit actually means”.

“We shouldn’t be sugar-coating anything. And in that scenario we would be forced to protect Ireland’s place in the single market by having some checking system somewhere away from the Border than can reassure the rest of the EU . . . that the integrity of the single market is protected,” he said.

“The Irish economic model is based on borderless trade across the European Union,” he said.

Mr Coveney said it was “difficult not to be sceptical” about the British government’s intentions. “There hasn’t been any substantive proposal from the British negotiating team to the Barnier task force. There certainly hasn’t been any proposal that comes close to doing that the backstop does.”

But he said it was the job of politicians to “see a way through the fog”.

Asked about British prime minister Boris Johnson ruling out a Northern Ireland-only backstop last night – despite previous signals in that direction – Mr Coveney was reluctant to comment on the apparent changes in the British position.

He said the meeting in Dublin earlier this week between the Taoiseach and Mr Johnson “was a positive one”.

He said the British position needed to change, but if it did, and a realistic proposition was put forward, the EU would respond positively.

However, he indicated the Irish Government would not permit the Border issue to be postponed until the next phase of Brexit negotiations on a future trade deal. “We are insisting that the Border issue is resolved at this point in the negotiations,” he said. “That is what the last British government committed to and that is what this prime minister also needs to follow through on. We want to help in that process,” he said. “Nobody wants to avoid a no-deal more than we do.”